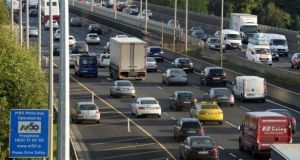 In a joint statement, Richard Bruton and Shane Ross expressed “grave concern” about the findings which suggested areas in Dublin city may have higher levels of air pollution than previously indicated. File Photograph: Cyril Byrne 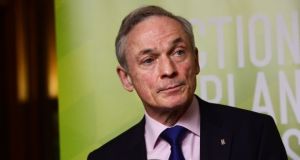 In a joint statement, Richard Bruton and Shane Ross expressed “grave concern” about the findings which suggested areas in Dublin city may have higher levels of air pollution than previously indicated. File Photograph: Cyril Byrne

Radical measures to counter rising air pollution due to increased traffic volumes in Dublin will be needed, according to Minister for Transport Shane Ross and Minister for Climate Action and Environment Richard Bruton.

In a joint statement, the ministers expressed “grave concern” about the findings of an EPA report which suggested areas around certain heavily trafficked roads in Dublin city may have higher levels of air pollution than previously indicated.

These higher levels are due primarily to traffic and some locations are at risk of exceeding the statutory EU limit for the pollutant nitrogen dioxide (NO2), and risk causing detrimental impacts on human health – Diesel vehicles have historically far higher NO2 emissions than other combustion engines, especially for older vehicles.

The EPA report, they added, underlined the importance of implementing the actions contained in the Government’s Climate Action Plan, including having 180,000 electric vehicles (EVs) on Irish roads by 2025, ensuring the EV charging network underpins public confidence, and accelerating steps to decarbonise the public transport fleet.

A regulatory framework on “low emission zones” and parking pricing policies was being developed which would provide local authorities with the power to restrict access to certain parts of a city or a town to zero emission vehicles only, while no new fossil fuel vehicles would be sold from 2030.

The report also confirmed the importance of actions already underway to disincentivise diesel car purchasing (a 1 per cent VRT surcharge); supporting the transition to EVs, incentivising taxis to switch to EVs and investing in cleaner, greener buses, they said.

The first national Clean Air Strategy, to be published later this year, would also address problems arising in relation to harmful emissions from a range of sources, including the transport sector, they confirmed.

“These findings... underline the need to implement the Climate Action Plan, which will have a significant impact on reducing emissions and improving air quality,” Mr Bruton said.

“Reaching 70 per cent renewable electricity and electrifying our private and public transport fleets will have a huge impact on air quality in our towns and cities,” he added. “We will now convene the relevant bodies to ensure we take immediate action on this matter and improve the air quality in Dublin.”

Older diesel vehicles were the key perpetrators in terms of NO2 emissions, Mr Ross noted. “I am glad to report we are already investing in new, cleaner and greener buses, electrifying Dublin commuter rail and providing generous incentives for taxis to make the switch to electric. We must also convince urban dwellers to switch from diesel cars to the cleaner electric and hybrid alternatives.”

The Ministers said they are to bring all relevant bodies together – including their departments; the four Dublin local Authorities and the EPA – to develop a plan to improve air quality in Dublin.

NO2 concentrations in Ireland were static for the period 2008 to 2015, possibly because of a combination of the economic downturn and favourable weather conditions, but monitoring was stepped up since in light of the economic recovery and increased dieselisation of the urban vehicle fleets.

In Western Europe, many cities have levels well in excess of EU-wide standards (40 micrograms/m3). London tops the list with an average annual concentration of 89 mcg/m3, followed by Paris (83), Stuttgart (82), Munich (80), Marseille (79), Lyon (71), Athens (70) and Rome (65). The EPA Report indicates the majority of Dublin city is well below yearly EU limits for NO2 but there are some areas which “show modelled exceedances above this limit”.

1 How a ship abandoned by its owner brought deadly cargo to Beirut
2 Production at Brady’s Ham plant in Kildare stops after 80 staff test positive for Covid-19
3 Caroline Flack died by suicide after learning of prosecution, inquest finds
4 Officials refuse to rule out ‘Midlands lockdown’ following Covid-19 surge
5 Masks Q&A: Who has to wear them in shops and what happens if you don’t?
Real news has value SUBSCRIBE