Protest at Government plans to cull 12,000 badgers over two years 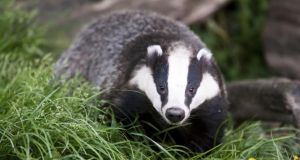 Dozens of animal rights activists protested in front of Minister for Agriculture Simon Coveney’s office yesterday over a plan to cull thousands of badgers.

The Department of Agriculture plans to kill up to 12,000 badgers over two years in an attempt to prevent the spread of tuberculosis (TB) in cattle.

The department is seeking contractors to carry out the cull.

Protestors believe the animals are being used as scapegoats for the spread of bovine TB and that a cull is “essentially a glorified slaughter”.

Animal Rights Action Network (Aran) spokesman John Carmody said the group is “disgusted” at the cull, which “will kill every badger in sight”, including those not infected with TB.

He said contractors will trap badgers with wire snares before shooting them.

He called on the Government to consider more humane solutions to the problem, such as vaccinations for cattle and badgers.

A Department of Agriculture spokeswoman argued the badger culling strategy has contributed to a significant reduction in bovine TB in Ireland.

She said that in 2013 the cases stood at about half those in Northern Ireland, which does not have a badger-killing programme.