Plans for new category of Dublin apartment to be released 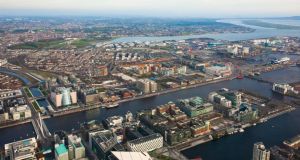 Plans to reduce the size of apartments that can be built in Dublin city are set to be released for public consultation.

The proposed studios could be built only in certain circumstances.

They would be permitted only in schemes of more than 100 apartments that have communal facilities such as common rooms and gyms.

The studios could make up just 7.5 per cent of the overall complex.

The complexes, which can be in the inner city or docklands only, must be for renters, not owner occupiers, and must be in single ownership for at least 20 years, during which time they cannot be sold off piecemeal.

The 45sq m apartments would also be allowed in older buildings to encourage the use of vacant upper floors.

The plan also proposes allowing an additional three storeys on city-centre apartment blocks; increasing the permissible number of one-bedroom apartments by 50 per cent; and trebling the number of single-aspect apartments allowed in a development.

The previous development plan expressed height through the number of storeys, but the new plan would set a maximum number of metres.

Through most of the inner city this would be 28m, which would bring the storeys permitted in “low-rise” apartment blocks from six to nine.

The number of one-bedroom apartments allowed could rise from 20 to 30 per cent, if the plan was approved.

The current plan requires 85 per cent of apartments to have windows on two sides. This would be cut to 50 per cent.

The ban on north-facing single-aspect apartments would be lifted if they faced a “substantial water body or designated open space”.

Councillors last night began debating whether these proposals, along with the rest of the development plan could be put on public display.

Motions from 12 councillors, most of them Fianna Fáil and Independents, opposed the new 45sq m studio category and wanted the minimum size of any apartment to stay at 55sq m.

However, it is unlikely they will have the support to stop proposal going on public display.

However, it is likely these provisions will also be released for public consultation.

The draft will go on public display next month for 10 weeks but it will be next year before the plan is formally ratified.