Vast site, one of the largest vacant plots in the city, will be used predominantly for housing 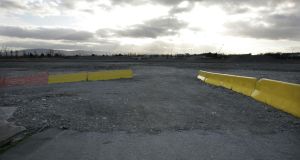 The former Irish Glass Bottle Company site, at Ringsend, Co Dublin which is controlled by Nama. Photograph: The Irish Times

The redevelopment of the former Irish Glass Bottle site is expected to see the provision of up to 3,000 homes in the Poolbeg peninsula in Dublin.

The project is to be “fast-tracked” following Cabinet approval for the creation of a special planning scheme for the area.

Dublin City Council in recent months sought the Strategic Development Zone designation in order to speed up the regeneration of the area, particularly for housing.

The fast-track planning powers will allow the council to grant development permission that cannot be appealed to An Bord Pleanála, significantly cutting time projects are in the planning system.

Nama, which controls the vast glass bottle site, one of the largest vacant plots in the city at more than 10 hectares, has signalled it is eager to get development under way.

The peninsula lands will be used predominantly for housing, with about 30 per cent commercial and retail development.

The commercial areas will be used as a “buffer zone” between the Dublin Port lands and the residential areas. New schools will also be included.

Building heights will be mostly under 28m, with some “mid-rise” buildings – up to a max of 50m at a limited number of locations in the vicinity of South Bank Road.

The former bottle-manufacturing plant, the largest plot of development land on the peninsula, was bought 10 years ago for €412 million by a consortium that included the State’s Dublin Docklands Development Authority and developer Bernard McNamara, using money borrowed from Anglo Irish Bank.

Considered an astonishing sum, even at the height of the boom, within a few short years the value of the site collapsed to about 10 per cent of what the consortium had paid.

The site came under the remit of Nama in 2012 and, given its size and Dublin 4 location, there has been considerable pressure, particularly from local politicians to develop the site for housing.

However, the council was eager to ensure the sequential development of Dublin’s docklands and sought first to develop the vacant land on both sides of the river between the Samuel Beckett bridge and Poolbeg.

In 2014, the docklands SDZ, which covers the Grand Canal Dock area on the south side of the river and North Lotts area on the north side, was approved by An Bord Pleanála.

Development of these lands has progressed at a far brisker pace than expected, with about 70 per cent of the available sites either under construction, approved for development or with the council planners for decision.

The new Poolbeg West SDZ will operate along similar lines. The council will prepare a planning scheme setting out the development parameters, such as the quantum of housing, and commercial building, and the permissible maximum heights.

The scheme will be available for public consultation, and will then be submitted to An Bord Pleanála which will also accept public submissions on the development.

However, once it is approved by the planning board, individual developers need only apply to the council and, once their proposals meet the terms of the SDZ scheme, they will received permission, which cannot then be appealed by a third party.