The Dublin Cycling Campaign celebrates its 20th anniversary this year 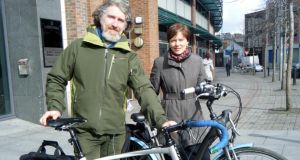 Damien Ó Tuama finds it difficult to believe the Dublin Cycling Campaign has been going for almost 20 years. Back in 1993 he and a few like-minded friends set it up more as a protest than anything else.

“I think there was a bunch of people who were just sick of decades of car-centric transport planning,” he recalls. “The bicycle had pretty much been forgotten by serious transport people. There had also been decades of awful cyclist and pedestrian casualties, on the quays in particular.

Horr ific casualties
“I think it was just an outrage that something so awful as people being squashed on the quays was happening so regularly by mainly heavy goods vehicles, many of them turning left. There was, I think, a horror at that.”

Since then the number of cyclist casualties has declined dramatically, going from 250 a year in 1998 to 90 in 2007, and fatalities are now “a very rare occurrence”. The Port Tunnel took heavy vehicles out of the city centre and the laying of 200km of bus and bike lanes “of varying quality” gave cyclists more room.

“Dublin is improving but it still has a long way to go,” says Muireann O’Dea, current chairwoman of the campaign. She joined in 2004 and thinks Dublin city has made good progress, but that the suburbs are lagging behind.

At the moment about 5 to 10 per cent of journeys in Dublin are done by bicycle.

For inspiration, Ó Tuama says Dublin should look to northern European cities where cycling is “an everyday normal thing: parents bringing kids to school, people of all ages, all backgrounds . . . it’s part of the everyday way of organising your city”.

O’Dea says the standard of cycling here is “not great” but improving. The usual complaints remain: running red lights, cycling on footpaths and without lights, weaving between vehicles, going the wrong way up streets.

“When I went to Copenhagen I noticed the standard there is very high,” she says. “Motorists and cyclists really respect each other and it makes it a much more pleasant environment to cycle in.”

The difficulty with emulating the Europeans and improving cycle infrastructure is negotiating with the plethora of organisations involved in Dublin’s transport policy.

“If you ask who’s responsible for transport in the city there’s no single answer. Whereas in London you’ve Boris Johnson, in Paris you’ve the mayor of Paris and that makes a big difference.”

“Cycling kind of piggy-backed on that,” Ó Tuama says. “Dublin Cycling Campaign was represented on various committees in the Dublin Transport Office and we were there going: ‘Look, if you’re putting in a bus lane don’t make it 3½ metres wide: make it 4½ metres wide so a bus can pass a cyclist and a cyclist can pass a bus.”

As local authorities face increasing financial pressure, Ó Tuama believes, cycling will become more important. “Councils have less money, but in terms of return on investment you can shift a lot more people out of cars and on to bikes and buses by investing in bikes than you can from invest in 10km of motorway.”