Noise restrictions to be imposed for Dublin public parks

Road, rail and construction noise to be curbed 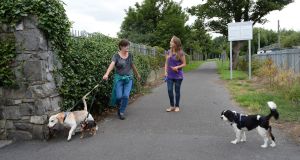 Dubliners seeking solace from the hustle and bustle of the city will soon be able to enjoy the sound of silence, or as near to it as possible, in some of the capital’s parks.

Minister for the Environment Phil Hogan has given Dublin City Council permission to designate seven parks and one beach as “quiet areas” where noise levels must be kept below 55 decibels during the day and 45 decibels at night.

The noise regulations will restrict future construction activity as well as road, rail and air traffic in the vicinity of the parks.

To qualify, the parks must already be relatively quiet and just two city centre parks have made the list – Blessington Basin, at the top of Blessington Street in the north inner city and the Cabbage Gardens, just off Cathedral Lane near Kevin Street in Dublin 2.

The six other areas where restrictions will apply are Edenmore Park and St Anne’s Park in Raheny, Mount Bernard Park between Phibsborough and Cabra, Palmerston Park in Dartry, Ranelagh Gardens, and Dollymount Strand.

Some of the city’s best -known parks such as St Stephen’s Green do not make the cut because sound levels exceed 70 decibels during the day. The purpose of the designation is to preserve areas which are “still tranquil”, the council said, and that offer an escape from exposure to high sound levels.

Existing legislation
The designation is designed to combat “environmental noise” and not “nuisance noise”. Existing legislation deals with nuisance noise, such as playing loud music, and allows a local authority or an individual to take a case to a District Court. Local authorities can also issue bylaws for the use of their parks which prohibit noise. The city council’s parks bylaws already prohibit the playing of musical instruments, radios or stereos at a pitch that would “give reasonable cause for annoyance”.

The new designations are primarily designed to minimise noise emanating from outside the park, primarily from roadways and construction sites. When planning applications for future developments are being considered, the “quiet area” designation will have to be taken into consideration.

“The quiet area designation would be a factor that the council would consider when assessing the application. The council could impose restrictions on the manner in which the works are carried out, limit the days or times of day that work could be undertaken, etc, so as to minimise the impact,” the council said. One of the parks chosen, Mount Bernard, directly borders the proposed route of the new cross-city Luas line which will run from St Stephen’s Green to Cabra. However, there was no official available in the council yesterday to say if, given that the line already has permission, its construction or operations would be affected by the designation.

The programme for government has a commitment to “clamp down on noise pollution by allowing for on-the-spot fines” by gardaí and certified local authority personnel.

This will require legislation and the proposal is likely to be put forward for public consultation in 2014.