No water cuts for householders who do not pay charges 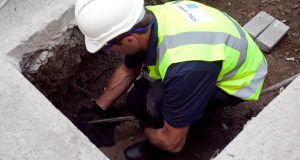 A water meter being installed. Irish Water is due to take over responsibility for the delivery of water services on January 1st next.

The Water Services (No 2) Bill 2013 provides for the transfer of power from the States’s 34 local authorities to the new utility.

While the Bill largely deals with the new relationship between the councils and Irish Water, it also formally confers on the utility the power to charge for water – but not to cut supply to homes.

Irish Water is due to take over responsibility for the delivery of water services on January 1st next.

The level of charges will be submitted for approval by Irish Water to the Commission for Energy Regulation towards the middle of next year, and the first domestic water bills are set to arrive in January 2015.

Thorny issue
How to deal with householders who refuse to pay has been a thorny issue for Government.

Minister for the Environment Phil Hogan got into hot water earlier this year when he indicated that water supplies could be cut from households that did not pay their bills.

Public health concerns forced a climb down, with his department later stating that water pressure would be reduced in the event of a failure to pay.

The new Bill fastens this commitment.

It will allow Irish Water to reduce supplies to all premises where charges remain unpaid, but not to discontinue supplies “either temporarily or permanently” to “dwellings”.

The legislation does, however, allow the utility to disconnect businesses that fail to pay .

“Dublin City Council’s current charge for commercial water is lower than the rest of the country,” he said.

Whole country
“Our current understanding is that the regulator and Irish Water intend to levy the same commercial water charges over the whole country.

“If this is the case then the current budget charge in Dublin City for non-domestic water will be increased,” My Lyons said.

A spokesman for the Department of the Environment last night said local authorities would be allowed to set the commercial water charge for next year.

“In 2014 the Commission for Energy Regulation will engage in a consultative process in July on commercial charges.

“The intention is that the harmonisation of charges will take place over a number of years,” he said.

Liabilities
The Bill provides for the transfer of water-related property and liabilities from the local authorities to Irish Water.

It also sets out a framework for the local authorities to continue to operate water services for Irish Water for the next 12 years.

These “service-level agreements” will be signed by councils by the end of this month.