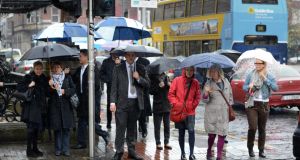 A new advisory council on climate change, tasked with overseeing Ireland’s transition to a low carbon economy, has been established by Minister for Environment Alan Kelly.

A new advisory council on climate change, tasked with overseeing Ireland’s transition to a low carbon economy, has been established by Minister for Environment Alan Kelly.

The new body is seen as critical to the development of a coherent national strategy on climate change.

Its primary function will be to independently assess the Government’s progress in cutting emissions and to advise directly on policy.

The 11-member council will be chaired by economist John FitzGerald, who retired from the Economic and Social Research Institute (ESRI) last year.

The six other independent members are all leading academics in their respective fields. They include Prof Ottmar Edenhofer, co-chair of working group III of the Intergovernmental Panel on Climate Change (IPCC); Prof Frank Convery, chief economist with the Environmental Defence Fund in New York; Prof Peter Clinch, the Jean Monnet chair of European Economic Integration and professor of public policy at University College Dublin.

A notable absence was Prof John Sweeney of NUI Maynooth, considered by many as the State’s foremost authority on climate change.

The council will also comprise four ex-officio members from the Environmental Protection Agency (EPA), Teagasc, the Sustainable Energy Authority of Ireland and the ESRI.

Environmental campaigners claim, however, inclusion of these four State-backed agencies will compromise the council’s independence and flies in the face of international practice.

This claim was disputed by Minister Kelly who said their presence would be crucial to the effectiveness of the council “as the level of experience and expertise they bring in terms of practical implementation will be key strengths for the Council in performing its advisory functions.”

In designing the format of the council, Mr Kelly said: “I was particularly mindful of the need to balance both economic and environmental perspectives. This balance will be critical within the context of how Ireland transitions itself to a low carbon, climate resilient, environmentally sustainable economy particularly as our finances continue to stabilise and recover.”

The Minister also announced the launch of a six-week public consultation on the development of a national mitigation plan, aimed at identifying the challenges and opportunities presented by the inevitable shift to a low carbon economy.

Mr Kelly also gave his strongest indication yet that Ireland would fail to meet its EU greenhouse gas (GHG) emission reduction targets, which insist on a 20 per cent reduction by 2020 on 2005 levels.

“As a country we’d be doing very well to” hit those targets, he said.

Emissions associated with increased levels of agricultural activity envisaged under the Government’s Food Harvest 2020 plan and with the recent abolition of milk quotas pose the greatest threat to achieving emissions targets.

Prof FitzGerald said the council would make use of the best research to provide independent advice to Government on how Ireland should tackle the crucial problems of climate change.

Oisín Coghlan of Friends of the Earth said: “The minister named a strong line-up for this first council. The question now is will they given be the explicit legal protection to do their job independently and the resources to do it properly.”

The Irish Farmers’ Association questioned the appointment Prof Matthews following his proposal to replace the national beef herd with forestry.

“If Alan Matthews is there to put forward views from the farming and food sector, he doesn’t have any credibility. His proposal is illogical as it would actually increase international greenhouse gas emissions and result in thousands of job losses across rural Ireland,” IFA president Eddie Downey said.

The establishment of the new advisory body is provided for in the Government’s climate change Bill, which passed through the committee stage in the Dáil earlier this week. The council will be set up on an interim basis prior to the legislation being passed.