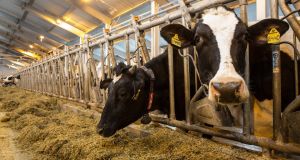 Ireland’s agricultural emissions are “uniquely high” in Europe, while the State is one of the largest contributors to emissions from agriculture in the developed world, a conference on climate change has heard.

Speaking at the launch of the Intergovernmental Panel on Climate Change (IPCC) scoping meeting in Dublin, Bill Callanan, chief inspector at the Department of Agriculture, Food and the Marine, said Ireland’s agriculture emissions were significantly higher than those of the rest of Europe.

In Ireland, agriculture represents 33 per cent of total emissions and is the single largest contributor to overall emissions.

In the rest of Europe, agriculture represents on average 10 per cent of total emissions.

Agriculture emissions increased in Ireland by 1.5 per cent in 2015.

The large number of dairy cows and increased milk production were the most significant drivers in this growth, according to the Environmental Protection Agency (EPA).

“In the developed world, only New Zealand has a higher proportion of emissions from agriculture,” he said.

“However, we are investing in improving production efficiency through better fertiliser management, grassland management and improved breeding.”

Some 70 scientists and climate experts from across the globe gathered in Dublin on Monday to discuss the IPCC special report on climate change, with a specific focus on land sustainability and food production.

The aim of the IPCC scoping meeting, which runs in Dublin until Thursday, is to provide politicians with the information needed to respond to the risks of climate change and meet the obligations of the 2015 Paris Agreement.

More than 100 people are attending the meeting to outline the report, which covers such topics as desertification, land degradation, sustainable land management, food security and greenhouse gas fluxes in terrestrial ecosystems.

Dr Laura Burke, director general of the EPA, said Ireland had joined other nations in actively highlighting “the need for a specific focus by the IPCC on the area of land, terrestrial systems and food production.

“Agriculture is at the core of the Irish economy,” said Dr Burke.

“They are also key contributors to climate change, with the IPCC estimating that 24 per cent of global emissions come from this sector.

“We need to remove the threat to global food production and increase the resilience of these systems to current and future climate and weather extreme.”

“Effectively, greenhouse gas emissions of one sort or another are a wasted resource.

“The emissions approach is a really important metric, so by having more productive animals you can produce more milk per cow and whilst the total emissions per cow can go up, the emissions per unit of milk actually go down a lot.

“That’s the most immediate pathway.”

IPCC chair Dr Hoesung Lee said the week’s gathering of experts would provide “a unique opportunity for the scientific community to engage with policy-makers and contribute to their decision-making”.

He called on the participants to provide practical information on how to use “the latest scientific findings to underpin the implementation of the Paris Agreement”.

1 Emily Maitlis thanks BBC viewers for support after Cummings row
2 The human cost of Covid-19: new figures reveal the toll on Ireland's care homes
3 All students will not return to school even if social distancing rules are relaxed - McHugh
4 Miriam Lord: Taoiseach is trapped in a Zoom session from hell
5 ‘Stick to the guidelines’ - People warned not to gather in crowds as sunny weekend approaches
Real news has value SUBSCRIBE