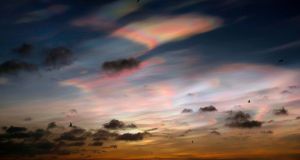 Birds fly near Whitley Bay, Northumberland in the UK beneath rare nacreous clouds on the coastline. The same formations have been spotted in Ireland. Photograph: Owen Humphreys/PA Wire

Clouds are well known to have silver linings but many of the little fluffy things seen hanging over Ireland in the early part of this week have also been tinged with red, orange, yellow, green, blue, indigo and violet.

These rainbow clouds - or nacreous to give them their scientific name - first began appearing in skies as far apart as Dublin, Galway and Belfast on Monday morning and as Tuesday dawned they reappeared across the country.

Not content with just looking in awe and wonder at the heavenly event, many people felt compelled to share the moment on social media platforms. Most wondered what lay behind the colourful clouds.

Joanna Donnelly of Met Éireann had the answer and it was a lot less magical than many might have hoped.

The iridescent clouds are a diffraction phenomenon caused by low winter sunlight bouncing off small ice crystals in the clouds and scattering the light to create a similar to rainbows although in a much weirder pattern.

“They were more prevalent yesterday but we are in the same weather flow today so they can still be seen,” Ms Donnelly said. “They look great but they are just an optical illusion just like rainbows.”

While the explanation is disappointingly simple, the event is still something of a rarity in Ireland as clouds have to be at just the right height, contain just the right amount of wispiness - not the technical term - and need to be hit at exactly the right angle by the sun.

They are mostly to be seen in the hour after dawn and the hour before sunset and are most common in the winter months closer to the North Pole.