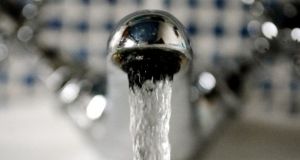 New figures show the level of “unaccounted for” water averaged 712 million litres per day in 2019 – down from 782 million litres the previous year. Photograph: Rui Vieira/PA Wire

The average daily amount of water lost through the Irish Water pipe network decreased by almost 9 per cent last year.

New figures published by the Commission for the Regulation of Utilities (CRU) show the level of “unaccounted for” water averaged 712 million litres per day in 2019 – down from 782 million litres the previous year.

“Unaccounted for” water, which is mostly attributable to leaks and overflows, represented 42 per cent of all water last year compared to 46 per cent in 2018.

Despite the falling levels, the CRU said leakage remains a significant challenge for the water sector in Ireland.

It has also pointed out that 1 per cent of Irish Water’s 1.6 million domestic customers accounted for nearly 15 per cent of all water consumed by households last year.

“While most high users are likely to have leaks, meter data indicates that some customers do not,” the CRU said.

It said the average household consumption of the top 1 per cent of water users was approximately 1.87 million litres per year – almost 15 times the average demand of all households.

The regulator said severe weather events in recent years had highlighted the need for Irish Water to increase its efforts to fix leaks, reduce and then maintain lower leakage levels “than is currently the case”.

The CRU said the decrease in leakage rates last year was a combination of data improvements following the introduction by Irish Water of a new leakage management system and the company’s leakage reduction activities.

Repairs completed under the First Fix Scheme in the first half of 2019 are estimated to have saved 12 million litres of water per day.

The CRU’s Energy and Water Monitoring Report 2019 shows the median consumption level of water by the average household last year was 96,031 litres or 263 litres per day.

It highlights how the median consumption level, which is regarded as the most accurate measure of typical household usage, has remained relatively stable over the past five years.

The average household allowance set by the Minister for Housing, Planning and Local Government before a consumer is liable for excess use charges, which are set to be introduced in January 2022, is 213,000 litres.

The CRU said there were also fewer planned and unplanned interruptions to water supplies last year with year-on-year decreases of 18 and 31 per cent respectively.

However, the number of customers affected by a boil water notice reached a record high of 1.3 million as a result of two separate incidents at the Leixlip Water Treatment Plant in late 2019 which supplies drinking water to more than 600,000 customers in the greater Dublin region.

The number of people affected by a water restriction notice at the end of 2019 at 3,689 was the lowest annual total in recent years.

“The system also allows us to identify the worst areas of leakage to plan targeted repair programmes to save the greatest possible volume of water,” the spokesperson said.

The company said it was focusing on carrying out leakage detection and repairs in the parts of the country where water supplies were under pressure.

It is currently fixing approximately 1,500 leaks per month.

Irish Water was on track to reduce leakage to 38 per cent nationally by 2021 which would save an additional 166 million litres of drinking water on a daily basis including 44 million litres in the greater Dublin area as a result of investment of €500 million, it said.