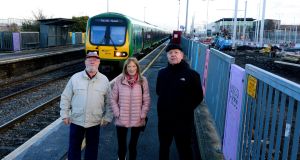 Broombridge, Cabra: Henry O’Brien, Dolores Ferris and John Coffey. Ferris says she has has witnessed “huge” changes to traffic levels but is readying herself for a seismic shift. Photograph: Cyril Byrne

When Cabra residents wake up next Monday morning, many will be afraid to peer out their windows. The nightmare in this Dublin suburb is that their relatively quiet streets will be overrun with zealous commuters, parking their cars and making a dash for the Luas.

As welcome as the tramline is, local concerns are mounting that unsustainable numbers will begin arriving at dawn to park near its newest stations.

“This was all flagged years ago and that’s when they should have been looking at parking spaces and disused land – lack of foresight,” shrugs Dolores Ferris of the Cabra Community Council.

“There is no [additional] parking, full stop. The other option is that cars will be parking outside people’s houses. Because we are in an older area, every house has a driveway and you will get people parking outside.”

There is a general feeling these concerns have been ignored. Everyone stresses how valuable the Luas line is but the “lack of foresight” argument as regards parking has taken hold.

While most of Phibsboro has pay-parking, Cabra is generally free. The area is made up of old council estates, built between the 1930s and 1950s, laced with narrow roads that can only tolerate parking on one side.

Ferris was born in one of these homes 67 years ago. She has witnessed “huge” changes to traffic levels in that time but is readying herself for a seismic shift.

“There is no negative that I can see apart from the parking,” she says. “If I win the lottery tomorrow I will be looking to buy land to put in a car park.”

It is this lack of “park and ride” that concerns Independent councillor Cieran Perry, another who says anxieties have not been adequately considered. Transport officials, he says, do not appear moved by local urgings that the new stops will lead to a spike in parking demand.

“If they want people to use the service they should be making it easy for people [by providing] a park and ride,” he says, highlighting existing issues around Broombridge train station.

Dublin Bus has been asked to consider running a shuttle service to bring people in to the local Luas stops, but any such potential solution is far out of sight.

Perry expects the level of local complaints to increase as soon as the first unfamiliar cars turn up outside people’s homes. “I guarantee if it happens as predicted [public representatives] will be inundated.”

One measure that can be taken is for residents to petition Dublin City Council to introduce pay-and-display areas, a drastic step for many, but one that would rein in a parking free-for-all. While Perry says many would see this as anathema, it is already happening in some areas.

The city council received four applications to introduce pay-and-display in the Cabra and Phibsboro areas within the last year.

It says this “one solution” is available to remedy Luas-related parking congestion.

“We will certainly prioritise these requests and respond with pay-and-display as quickly as possible, but it is prudent not to prejudge where there might be issues and we should only act where the need is clearly demonstrated and wanted by the residents,” it said in a statement.

“We are very cognisant that any difficulties incurred be monitored and address in full communication with residents as we enter the Luas Cross City go-live period.”

Annual residents’ parking permits cost €50 for one year and €80 for two, but pay-and-display implementation requires a “demonstrable and clear desire” for it, according to the city council. At least a quarter of residents on a given road must be in favour for the process to begin, and then a ballot on its introduction is taken.

The process is rigorous, but it can be effective. When the original lines opened more than a decade ago, Dún Laoghaire-Rathdown County Council introduced pay-and-display schemes in non-residential areas to combat overzealous parking behaviour by those rushing to use the new trams.

This happened around Brides Glen and Cherrywood, says Fianna Fáil councillor Cormac Devlin, where there were no provisions made for park-and-ride.

Pay-and-display helped, but it also reduced the number of parking spaces. Previously people had left their cars atop grass verges; wherever they could squeeze and run for a tram.

“It was nuts,” says Devlin, “but it seems to have calmed down now.”