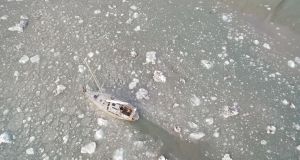 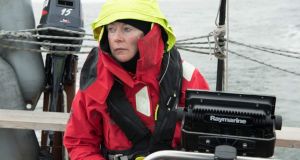 Barbara Fitzpatrick on board ‘Northabout’. She is the first Irish woman to sail through both the Northeast and Northwest passages. Photograph: Polar Ocean Challenge

An Irish-built yacht which took two summers to make the first circumnavigation of the Arctic ice cap by a small boat has completed a similar voyage in just seven weeks due to global warming.

The 15-metre aluminium yacht Northabout was due to reach the Co Mayo coast on Wednesday night and sail from Blacksod Bay into Westport on Thursday.

On board for the record-breaking voyage was Irish woman Barbara Fitzpatrick (49) from Ballybay, Co Monaghan, who has become the first Irish woman to sail through both the Northeast and Northwest passages.

Five years ago, sailors Máire Breathnach and Sibéal Turraoin from Ring, Co Waterford, set the record for the first Irish women to sail through the Northwest passage – then an ice-bound Arctic route linking the Atlantic and Pacific.

Ms Fitzpatrick was one of two women – the second being North American sailor Constance Difede – to complete the anti-clockwise polar circumnavigation from Russia to Canada and west Greenland which was led by English adventurer David Hempleman-Adams.

“We had an amazing trip – polar bears with their cubs, seals every day – but it was quite a surprise to see how the ice had melted, as I had been to the North Pole and South poles before and had skied across Baffin Island in the Arctic,” Ms Fitzpatrick said, speaking from her home in Bath.

Adventurer and Northabout builder Jarlath Cunnane said he was shocked by the quick nature of the voyage.

Mr Cunnane, from Co Mayo, was skipper of the Irish expedition on Northabout which navigated the Northwest and Northeast passages in the Arctic in 2001 and 2004 respectively. He was awarded the Blue Water Medal by the Cruising Club of America for his efforts.

“We would never have imagined that within 14 years of setting out on our two-season voyage, climate change could have such an impact,” he said.

Dr Michael Brogan, who was a fellow member of the original Northabout voyage, recalled that both the Northeast and Northwest passages were “choked with ice” between 2001 and 2005.

“It’s scary how the ice has disappeared in 10-15 years, but it is also a testament to Jarlath who built the boat that Northabout has achieved and survived those two historic voyages,” Dr Brogan said.

Mr Hempleman-Adams purchased Northabout from the Irish team with an aim of trying to break the polar circumnavigation record.

The businessman has already climbed the highest peaks on all seven continents and travelled to the north and south geographical and magnetic Poles. He has broken 47 Federation Aeronautique Internationale ballooning records.

He and his crew left the yacht in Greenland, and Northabout was then sailed by a professional crew to Ireland, en route to the boat’s new home port of Bristol, England.