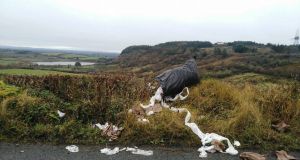 More and more people are dumping their household waste along rivers, housing estates, fields and walkways, according to a Cavan/Monaghan TD, who says additional resources are needed to police the problem. Niamh Smyth says she is horrified by the “complete disregard for our countryside”.

In Bailieborough, Cavan County Council recently cleared 31 bags from a lake while in Sherlock, 12 bags of rubbish were dumped in a river, the second such incident since Christmas.

Many of the bags of household rubbish had been opened by animals and waste was scattered all over the ground prompting fears that it would attract vermin.

“I know this is only a tip of the iceberg,” she said, describing such littering as “the next major environmental epidemic to hit our countryside.

“I have continued to call for more funding to deal with illegal dumping and I’m again appealing to the Minister to allocate more money to councils as they combat this litter epidemic which is facing our beautiful countryside,” she said.

“The longer the Government leaves the councils without extra reinforcements, the more impact dumpers will have on our environment,” added the Fianna Fáil TD.

In Monaghan there is only one litter warden, that is down from two full-time and eight part-time wardens in 2013.

“If more wardens are allocated to counties Cavan and Monaghan, I believe the provision of additional staff in this area will see more illegal dumping cases come before the courts,” she said.

“The figures say it all really,” said Ms Smyth. “There is a complete disregard by culprits for the law and without the proper resources this will continue.”