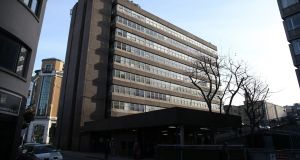 Dublin City Council has granted permission for the demolition and redevelopment of Hawkins House, paving the way for a €50 million office scheme which includes Apollo House.

The council in recent days granted permission to receiver Mazars for the demolition of Apollo House, the 1960s office block on Dublin’s Tara Street which has been occupied by housing activists and homeless people.

The permission now granted to the Office of Public Works will allow a combined development of a new office “quarter”, along with shops, restaurants, a public plaza and a diagonal pedestrian street. However, there will be no apartments in the development which is almost 50m tall.

The government announced plans for the demolition and reconstruction of Hawkins House, the former Department of Health headquarters, in 2007.

Built in 1962 on the site of the former Theatre Royal, it is often cited among the ugliest buildings in the city, as is its slightly younger neighbour Apollo House. It was built in 1969 and until last year leased to the Department of Social Protection.

The scheme, which takes up almost an entire city block bounded by Poolbeg Street, Tara Street, Townsend Street and Hawkins Street where the new Luas cross-city line is under construction, is one of the first major developments sought under the city council’s 2012 George’s Quay local area plan.

This plan envisages the creation of a new “midtown” for the city south of the Liffey to Pearse Street and from Hawkins Street to Lombard Street.

Three key sites have been identified as having the potential for significant redevelopment: the Hawkins House block on Poolbeg Street, Tara Street station and its surrounds; and the City Quay area from Moss Street to South Street.

Of these, the Hawkins House block will see the most dramatic redevelopment, as unlike the other sites, almost all the buildings dating from the 1960s and 1970s are likely to be demolished.

Tom O’Brien and Simon Coyle of Mazars , receivers to Cuprum Properties Limited, one of Garrett Kelleher’s development companies, have control of Apollo House and the Long Stone, which, although on Townsend Street backs on to the car park beside Apollo House.

The two other significant buildings on the site, the nine-storey former An Post buildings at College House and the recently closed Screen Cinema, are also likely to be redeveloped in the near future.

The 400 staff at Hawkins House will move to the former Bank of Ireland headquarters on Lower Baggot Street, which is currently being remodelled.