Lidl staff at partially demolished store to be redeployed 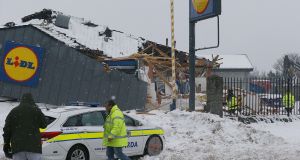 All the employees at a Lidl shop which was partially demolished by looters last Friday evening will be redeployed to other outlets in the area, the retailer has confirmed.

A mechanical digger, taken from a local building site, was used to knock down parts of the supermarket on Fortunestown Lane in west Dublin during Storm Emma.

A safe containing €60,000 was subsequently taken out of a cash room using the digger, although attempts to break it open at the scene failed and it was recovered intact by gardaí.

Nine people are currently facing charges in relation to the incident.

“A meeting was held today with our team from Fortunestown,” a Lidl spokeswoman said on Monday afternoon.

“We can confirm that each of the 30 team members will be redeployed to other stores in the area. We will not have the criminal actions of others impact on the livelihood of our hard-working team.”

She also expressed gratitude to the general public for the “kind words in the aftermath of this incident” and said the team who worked in the store had been “genuinely blown away by the swell of support from, not just the community that they serve daily, but from right around the country”.