Environmental lobby group says its recommendations were not taken on board 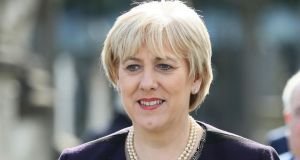 Minister for Heritage Heather Humphreys is due to launch the 2017-2021 National Biodiversity Action on Thursday. Photograph: Brian Lawless/PA Wire

The 2017-2021 National Biodiversity Action Plan is due to be launched by Minister for Heritage Heather Humphreys on Thursday morning.

But Environmental Pillar, which has already had sight of it, says the plan falls short of what is required to halt biodiversity loss over the coming years.

Environmental Pillar, which represents a coalition of 26 environmental organisations in Ireland, criticised the Government for a lack of engagement on the document, saying the views and suggestions of outside parties had not been listened to.

In a statement, it said: “Pillar representative groups made recommendations to the plan which were not taken on board. The plan relies too heavily on rehashed biodiversity requirements under existing departmental actions to comply with biodiversity legal requirements.”

It was added that there remains a need for “greater ambition, coordination and resources” in order to ensure the success of future biodiversity initiatives.

The plan includes specific actions to protect biodiversity, and is demonstrative of the State’s continued commitment to meeting targets in the area going forward, according to the Department of Heritage.

Commenting on the latest plan, the third of its kind to be produced by successive governments, Environmental Pillar coordinator Michael Ewing said: “Ireland’s National Biodiversity Action Plan 2017-2021 comes at a critical time for many of Ireland’s most threatened habitats and species.

“Biodiversity loss undermines the capacity of our environment to continue to provide society with essential services and undermines the green image which is the foundation for our farming and tourism sector.”

Proposals from the Coalition have included dedicating ring-fenced funding for priority species and habitat conservation projects, as well as for awareness-raising campaigns for the general public and a more concerted effort at monitoring the preservation of hedgerows.