‘Very unpleasant Doolin’ is in fact ‘pristine’, according to ferry operator 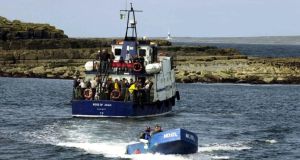 Tourism body Fáilte Ireland is to evaluate parts of the Wild Atlantic Way in light of litter at “pinch points” along the route which runs along the west coast.

The move is in response to an Irish Business Against Litter (IBAL) survey highlighting litter black spots, some of which are located on the route. An Taisce, which assessed 50 beaches, harbours and rivers on IBAL’s behalf, found 46 of the sites were “littered” or “heavily littered”.

The findings in IBAL’s first survey of coastal areas and inland waterways provoked an angry response in Co Clare, where the environs of Doolin pier were classified as “a litter blackspot”.

Fáilte Ireland has been carefully monitoring development of the Wild Atlantic Way through an environmental monitoring group which has been in place for four years, according to Alex Connolly, its head of communications.

Litter issues were part of the group’s remit, though overall environmental impact was its prime concern, Mr Connolly said – the group includes local authorities, environmental groups such as Coastwatch Ireland and other State agencies including the Environmental Protection Agency.

Urgent action is needed to halt the deluge of waste clogging our cities, rural towns and marine environment

Fáilte Ireland surveyed more than 2,000 holidaymakers every year, and in its latest survey 79 per cent were satisfied Ireland was “litter- and pollution-free”, he said. But the tourism body was not complacent on the issue, particularly as nine out of 10 overseas visitors come to Ireland for its unspoiled landscape, he said.

“The IBAL findings are of interest to us. We are looking at perceived litter blackspots. They will feed into that,” he said.

Clare County Council said it disagreed with IBAL’s finding that Doolin pier was a “litter black spot”. The local authority employs two harbourmasters in Doolin and in conjunction with local private ferry operators and an on-site catering operator, maintenance of the area around the pier is a priority, a spokesman said of the pier area.

“Clare County Council invests considerable time and resources in promoting environmental awareness and litter prevention in association with community groups throughout Clare and this collaborative approach is reflected in the recent awarding of prestigious blue-flag and green-coast status to 12 Clare beaches,” he added.

The condition of Doolin pier was also defended by Eugene Garrihy, operator of the Doolin to Aran Islands ferry. “In my view, this place is pristine . . . It’s grossly unfair that it’s classified as a litter black spot,” he said.

An Taisce graded Doolin pier as “a very unpleasant site” for tourists due to heavy littering. “There didn’t appear to be any bins or litter awareness notices,” it noted. The director of its environmental education unit, Michael John O’Mahony, strongly defended its assessment, which was “based on what we see before us”.

With 40 per cent of Irish coastal areas badly littered it was “a clear sign that urgent action is needed to halt the deluge of waste clogging our cities, rural towns and marine environment”, the Environmental Pillar (EP) said.

“The findings in the IBAL survey carried out by An Taisce builds upon the All-Ireland Coastwatch Survey earlier this year that found plastic bottles at over 80 per cent of coastal sites surveyed,” it said.

The current system to tackle waste was failing, with “plastic bottles and disposable coffee cups continuing to foul our countryside and to destroy our marine environment”.

The EP, a coalition of Ireland’s main environmental groups, called on the Government to introduce a series of measures to cut down on plastic consumption including the introduction of a deposit return scheme for drinks containers.

Its spokeswoman, Karin Dubsky, said: “The amount of marine litter in our oceans is predicted to increase year on year. Without serious action from both our Taoiseach and other world leaders there will be frightening consequences for our marine environment.”

She added: “We have already seen increased mortality in many species due to ingestion and entanglement, toxic and reproductive impact along food chains and we now routinely find plastic in the seafood on our own plates.”

“We are calling on the Government to introduce a range of policy measures to reduce this particularly stubborn widespread litter load before it reaches our marine environment. As with any problem, the best solution is to get to the very source of it and stem the flow of plastic into our waste stream and into the environment.”