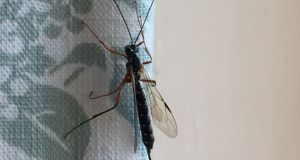 House guest: one of the wood wasps in Melissa Wilson’s living room

I have had three of the large insects in my photograph flying around my living room. The smallest was 8cm long. I nearly had a coronary.
Melissa Wilson
Dalkey, Co Dublin

It is a female wood wasp, ‘Sirex juvencus’. The long tail is an ovipositor, which she uses to bore into pine trunks to deposit her eggs. The eggs hatch and feed on the wood for two or three years. They sometimes emerge from building timbers.

Each year blue tits build their nest in our nesting box. This year, while the tits were feeding their young, I watched a wren also bring grubs into the box. The wren waited for the tits to exit before entering the box herself.
Meriel Heather
Green Park, Dublin

The wren may have had a nest close by and for some reason lost her own nestlings. Female wrens do most of the feeding of the young.

In early June, on the small island at Glassilaun beach, in Co Galway, it was spectacular to see hundreds of six-spot burnet moths lying about and mating on such a perfect day.
Barbara Browne
Knockmore, Co Mayo

There must have been knapweed or scabious flowers close by.

Recently in Roundstone, Connemara, the beach at Gurteen was infested with flying beetles, about the size of a small fingernail. They tended to cluster over rocks.
Jean O’Toole
Dalkey, Co Dublin

That sounds like the garden chafer, ‘Phyllopertha horticola’, a small brown beetle that swarms in summer, and can be found in dry habitats.

Has anyone mislaid a peacock? One guy has been around our place for the past four weeks.
Joe Brennan
Cabinteely, Dublin