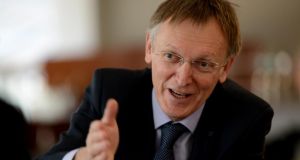 EU environment commissioner Janez Potocnik: “One of the problems we’ve had is trying for too long to defend the undefendable.” Photograph: Cyril Byrne

The world will not be able to feed an extra 2 billion people by 2050 if it continues to “throw away 30 to 50 per cent of the food we produce”, EU environment commissioner Janez Potocnik warned in Dublin yesterday.

In an interview with The Irish Times , he said the European Commission would spell out its views on how to curb food waste in a “communication” later this year to the European Parliament and Council of Ministers.

Asked about the deal engineered by Minister for Agriculture Simon Coveney to renew the EU’s Common Agriculture Policy (Cap), Mr Potocnik said he hoped “some of its more negative impacts” on the environment would be reversed.

The commission’s view was based on a “simple philosophy” that public money should not be spent on pollution. Therefore, payments under the Cap should be conditional on improving rather than degrading the environment.

But the council and parliament had “reverted to traditional practice”, he said, adding that “serious questions are emerging about how successful it would be”. Whenever “flexibility” is mentioned, “it usually means going in the wrong direction”.

Food Harvest 2020
Asked about Ireland’s Food Harvest 2020 programme, which envisages a doubling of agricultural production here, Mr Potocnik admitted that he was unaware of it. But he said its environmental impact would have to be taken into account. Whether a strategic environmental assessment of Food Harvest 2020 should be carried out was a matter for the Government, but his advice was that this would be “useful” because of the “evidence of accumulating debt in the environmental sector”.

On septic tanks in rural areas, he said the situation was “pretty much under control” with the adoption of a national inspection plan. As a result, since late February or early March, Ireland was no longer required to pay a daily fine of €12,000, he added.

On the issue of the protection of 53 raised bogs, he noted that there was now a national management plan and moves to prosecute turf-cutters for breaches. But he expected that Ireland would seek a “small deviation from full implementation” of the EU habitats directive.

As for air pollution, Mr Potocnik said it was causing 420,000 premature deaths per year in Europe as well as serious illnesses, lost working days and billions of euro in economic costs. “These are exactly the issues we want to address in our air quality review.”

Given that traffic is one of the culprits, particularly diesel-fuelled vehicles, he agreed that electric cars were “one of the most promising answers” and that it would make more sense to use public money to subsidise them, rather than having to “cure people who become ill”.

Noting that Europe’s use of resources had increased by 300 per cent between 1998 and 2011, he said it was “absolutely imperative to produce products that are reusable and recyclable”; indeed, he saw this as “the only way to remain competitive” in the long term.

Sunset industries
The idea of protecting “sunset industries” just for the sake of saving 2,000 jobs here or there was indefensible, he said, adding that “green growth” would produce more stable jobs. “One of the problems we’ve had is trying for too long to defend the undefendable.”

He denied claims by the Brussels-based European Environmental Bureau that the commission’s Irish secretary-general Catherine Day had intervened on numerous occasions to block environmental policies because of the fragile state of Europe’s ecomomy.

According to Mr Potocnik, Ms Day was the “wrong target”. In his own experience, she was “one of the best organised persons I’ve ever seen”, she was doing her work “very loyally” and had co-operated with him in an “exellent way” on his environmental agenda.

On climate change, he said the trend was now “so serious” that the EU needed to engage soon in a round of discussions about setting interim targets for 2030 and 2040 if it was to reach the goal of cutting carbon dioxide emissions by up to 80 per cent by 2050.

“In just 30 years from now, there will be 2 billion more people . . . so we can’t continue with ‘business as usual’. And with 60 per cent of the world’s habitats already degraded, it’s absolutely necessary to change production and consumption patterns.”