Plans have met resistance from An Taisce and other historical societies 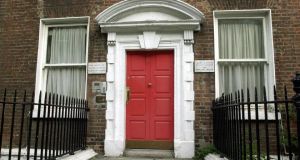 Planning permission has been granted for the development of a new office block on Dublin’s Molesworth Street, despite various objections from historical preservation bodies over its construction.

The plans had been met with staunch resistance from An Taisce and various other historical societies when first lodged last September. However, the State planning authority has given the green light for the demolition of the current structure along with the construction of the new six-storey office block, albeit with revised conditions.

The new development will incorporate an office block one story taller than that which exists on the site, which fronts onto both Molesworth and South Frederick Streets and contains the passport office. The new structure will include a “green roof, atrium and an internal landscaped courtyard” along with a two-storey basement car park.

Plans also include a provision for “a significant visual corner element at the junction of Molesworth Street and South Frederick Street which is higher than the remaining elevation and parapet level” on either street, as well as a terrace setback on fourth and fifth floor levels.

Having initially been granted permission to proceed by Dublin City Council in November, the process was delayed following objections from An Taisce and the Irish Georgian Society, which centre around the development’s proximity to six adjoining protected structures, including the Freemasons’ Hall.

In its submission, An Taisce contended that “the proposal would overpower the location and seriously injure the scale, composition and vista of Molesworth Street, an important historic city street”, and further stated that “the corner element is overblown and would overpower this highly-sensitive streetscape, and is an incorrect urban design response”.

In the same inspector’s report, the Irish Georgian Society accused the proposal of making “no attempt to respect or enhance the character and composition of the Georgian streetscapes of Molesworth Street or South Frederick Street”.

However, representatives of the applicant, IPUT Management Systems Ltd, replied that Molesworth Street “cannot be considered to be a Georgian Street” due to demolitions and redevelopments over the last number of centuries, and that the existing building is outdated and in demonstrable need of development.

IPUT, the company behind the new office block, has a portfolio of nearly 80 properties across the office, retail and logistics sectors including Grafton Street’s Brown Thomas building and the Pavilions shopping centre in Swords.

It is estimated that IPUT, which recently announced the appointment of former head of asset management in Nama John Mulcahy as part of its operations, receives about €70 million in rent per annum, and the company has committed in the region of €400 million to the Dublin office sector over the last 18 months.

As part of the revised permission guidelines, An Bord Pleanála has insisted that an archaeologist must oversee all site inspections and excavations that take place, all details of exterior decoration must be approved by the authority, and work should only be carried out between 7am to 6pm weekdays and 8am to 2pm on Saturdays to reduce disruption.

The applicant must also pay €863,000 in financial contributions “in respect of public infrastructure and facilities benefiting development in the area”, and €352,000 in respect of Metro North as is statutorily required.