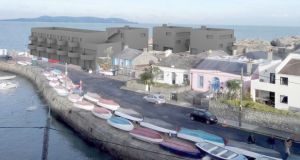 A major campaign is under way to stop what has been described as the ‘Costa del Sol’ style development at Bulloch Harbour in Dalkey, south Dublin.

On the eve of its 200th anniversary, the coastal inlet has been selected by developers for a commercial and residential scheme that would visually transform a postcard quay popular with fishermen and tourists.

The controversial plans have drawn the ire of local residents, more than 300 of whom crammed into a public meeting at the Fitzpatrick Castle Hotel in Killiney on Thursday to discuss mass opposition.

A 50-minute presentation described a harbour that has existed for hundreds of years and whose modern walls were constructed over just eight months in 1818.

In December, Bartra Capital Ltd, founded by developer Richard Barrett, filed a planning application that would see the replacement of a number of disused sheds with seven ground floor commercial units and six three-storey terraced dwellings,plus a further three houses to the rear.

“This development could be taken from the Costa del Sol. It’s not Irish seaside architecture,” said Susan McDonnell, chair of the Bulloch Harbour Preservation Association (BHPA), outlining the contentious plans.

Those in attendance groaned at a crude computer mock-up depicting dark buildings towering over the existing colourful harbour scene.

Use slider to compare how scheme would look

It was likened by speakers to the “sterilisation” of Greystones following its own recent harbour development, and to equally unpopular plans for apartments near the pier in Howth, across Dublin Bay.

“We are looking at not a site; we are looking at a piece of history,” said Des Burke Kennedy, another member of the BHPA who brought the meeting through a pictorial tour of the harbour over generations.

The proposed development on the former Western Marine site includes a café, community water sports facility and a relocated clubhouse. There would be five, three-storey 154sq m quayside residential units and one two-storey 89sq m unit with balconies and roof terraces.

Off-street parking for 11 cars to the rear and three three-storey detached five-bedroom dwellings at the back are also planned. There is a separate application for demolition and site clearance.

“A child of three with a Lego set would come up with a better design than that,” said a man by the name of Bill who was born on the nearby Coliemore Road.

Objections are expected to focus on the historic and cultural value of the area, excessive scale and height, as well as concerns regarding parking and access.

The meeting featured pictures of “giant waves”, one as high as 60 feet, crashing over the harbour, and the issue of winter flooding was raised.

Zoning on the site was changed in 2009 to ‘Objective W’ for the provision of waterfront development. The meeting heard the only part of the area that is protected is the quays.

“This is one of the last working harbours on the east coast and it is vital that we look after it,” said Ms McDonnell.

Those intent on fighting the plans were told to expect a prolonged campaign lasting more than a year and the expectation of seeking an oral hearing at An Bord Pleanála.

In response Gráinne Hollywood, director of construction and development at Bartra Capital said: “We chose a team of the highest quality and experience for this site to provide a scheme of development which after much consultation with various parties is, we believe, both respectful and enhancing of the harbour and the local environment.”