Should we punish ‘reckless’ people who need to be rescued? 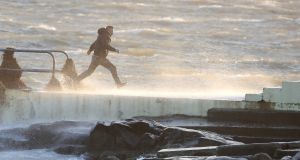 A man runs out to a diving board in Salthill, Galway, during Storm Ophelia. Photograph: Niall Carson/PA Wire

Mariner Eamonn O’Rourke was far too busy to be looking at social media when out in the middle of Storm Ophelia off the south coast on Monday morning.

Had he the opportunity, he would have seen postings expressing concern about foolhardy behaviour during a Met Éireann red alert weather warning.

O’Rourke and his seven colleagues on board were at sea for a very good reason, as crew of the RNLI all-weather lifeboat at Rosslare. Their quick but calculated launch involved responding to a yacht with three crew on board in distress some 12 miles off the Wexford coastline.

RNLI Rosslare lifeboat operations manager Dave Maloney knew the risk they were in, describing it as “one of the trickiest launches we have had in a long time”.

For though Storm Ophelia was forecast to be potentially devastating overland, and short and sharp at sea – in contrast with the gathering swell and high tides of late 2013 and early 2014 – the south coast was bearing the brunt of the cyclonic winds.

The Marine Institute’s M5 weather buoy off the southeast broke loose. When recovered, its data included an individual wave height of almost 18m or just over 58ft – terrifying, but still some 7m short of the 2014 record of 25m at Kinsale.

In the west outrage was being expressed onshore about the behaviour of several swimmers in Galway’s Salthill. This fed into an online and wider post-Storm Ophelia debate about exposing rescue agencies to needless risk – culminating in Taoiseach Leo Varadkar saying he would favour making it a “criminal offence” to ignore severe weather warnings.

Psychologist Niamh Fitzpatrick – who said she was “disgusted” at the “reckless idiots” – had more authority than most to comment. Her sister Capt Dara Fitzpatrick and colleagues Capt Mark Duffy and winch team Paul Ormsby and Ciarán Smith died in the Rescue 116 helicopter crash off north Mayo just over seven months ago, and the bodies of the two winch crew are still missing.

Research shows that young people are also often the first to make a decision to save a life, at their own cost – as happened during the tsunami in southeast Asia in 2004

Fitzpatrick’s frustration expressed on Twitter was echoed by RTÉ radio broadcaster Joe Duffy in his conversation on Liveline with a woman who went swimming at Sandycove in Dublin. “I don’t care if there was Radox in the water ... There was a status red warning,” he said.

During the ensuing debates, participants in adventure sports earned little sympathy in trying to explain the nature of risk, and good training and personal responsibility.

As one teacher observed, people are bombarded with images of the virtue of extreme sports. But research shows that young people are also often the first to make a decision to save a life, at their own cost – as happened during the tsunami in southeast Asia in 2004.

If Varadkar’s mooted legislative approach were already in place, the three crew on the 10m yacht might have been hauled in by gardaí. When the yacht left Rosslare to seek further shelter on Tuesday, and was then offered a tow by the RNLI Arklow lifeboat into the Arklow marina, there was further media criticism of the unfortunate sailors, who at that point had been acting on local advice.

O’Rourke’s view is that while the sailors might have been wise to check their forecasts, they should not be punished or pilloried in the press for same. “The yacht had left Southampton, couldn’t get into Wexford harbour in the heavy seas and was right to issue the Mayday – I just wish it had issued it a bit earlier,” he says.

The RNLI has lost many volunteer lives while saving others during its almost two-century history, including the entire crew of 15 of the Dún Laoghaire lifeboat in 1895, and, most recently in these waters, the loss of Fintan Sinnott when the Kilmore Quay lifeboat capsized twice in 1977.

Advances in technology and vessel design have improved the safety of crews, but there is still an option to decline a tasking – as is the case with all Irish Coast Guard helicopter crew and with the many volunteers around the coastline.

An alternative to prosecution is to charge for rescue, as occurs in some European countries, including France

The crews “do not make a judgment on why the person in trouble needs assistance or what they should have done differently to avoid that situation”, she adds. “ There is a no blame culture and this is what ensures that people continue to raise the alarm.”

The Irish Coast Guard and Irish Water Safety concur, and believe legislation would be almost impossible to implement fairly – there are existing rules on life jacket use and alcohol intake, not always evenly applied, but “one can’t legislation for stupidity”, one experienced official said.

An alternative to prosecution is to charge for rescue, as occurs in some European countries, including France. A rescue helicopter call-out cost is about €2,500 an hour, including a standing charge to cover crew costs. The RNLI , which relies heavily on volunteers, is loath to give any comparative figure.

However, Ireland is party to international agreements that would preclude charging for safety at sea. For this reason coastal communities are among the most active fundraisers for the RNLI.

Irish Water Safety chief executive John Leech welcomed the Ophelia debate, but believes moral persuasion to be more powerful in the long term than prosecution or a hefty bill.

“The danger with charging is that it could actually cause fatalities,” he says. “People are likely to leave it too late before they call for help.”