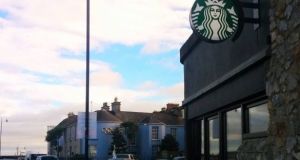 The council had previously issued a warning letter to Starbucks concerning the change of use of the premises in Howth from a bicycle shop to a coffee shop/restaurant.

Fingal County Council has served notice on the owners of a Starbucks outlet in Howth to discontinue its use after inspectors found they changed the use of the premises without planning permission.

The enforcement notice was served on the owners of the Harbour Road Starbucks on August 16th and gives them four weeks to discontinue the unauthorised use of the premises.

Prosecution proceedings may be initiated in the District Court if the order is not complied with, the council said.

Cllr Brian McDonagh (Labour), who raised the issue, said he was glad the council had acted as Starbucks was attempting “to avoid going through the minutiae of proper planning that ordinary businesses have to go through”.

The council had previously issued a warning letter to Starbucks concerning the change of use of the premises from a bicycle shop to a coffee shop/restaurant.

The council said the owners responded by saying that under planning and development regulations no change of use had taken place and that the business at the site remained a shop as opposed to a restaurant.

The registered owner, on whom the notice was served, is Faynon Ltd. The company’s directors are listed as Ciaran Butler and Colum Butler. The brothers also run Entertainment Enterprises Group, which signed an agreement with Starbucks in 2012 to licence the coffee giant’s outlets in Ireland.

It is understood that Faynon Ltd argued the operation in the former bike shop was effectively retail because many of the items sold there would be taken away. The council said its planning inspectors visited the premises and decided that, considering the extent of seating and the type of services offered, it equates with a restaurant.

The Irish Times contacted Entertainment Enterprises Group about the matter by phone and email but a response has not yet been received.

In March, An Bord Pleanála ruled that Starbucks had opened three outlets in Cork city without obtaining the necessary planning permission.

The coffee company argued that its operations in the three premises was retail in nature and thus kept with the outlets’ planning designation.

However, the planning board decided in each of the cases that “the scale, nature and layout of the premises is more akin to a restaurant use which is expressly excluded from the definition of ‘shop’”.

A similar case is currently before An Bord Pleanála to determine whether the change of use of part of a Smyths toy shop in Airside Retail Park, Swords, to use as a coffee shop by Starbucks is permissible under the planning and development regulations.

The Howth Starbucks case has not been referred to An Bord Pleanála. When a company against whom an enforcement notice has been served appeals the decision to the planning board it will often ask the judge presiding over any legal case to allow it to continue trading until the planning board reaches a decision, a spokesman for An Bord Pleanála said.