COP25 reaction: ‘We got two weeks of blocking from big polluters’ 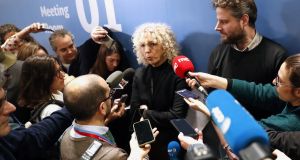 Climate activists and environmental NGOs have expressed dismay at the weak outcome at the UN climate talks.

After two weeks of talks all countries agreed to bring forward new climate pledges in time for the next major conference in Glasgow next year. Decisions on other issues, including carbon markets, were deferred.

They stressed the continuing need for bolder ambition and the full implementation of the Paris agreement, backed by robust rules.

Throughout the Madrid talks hosted by Chile and Spain, youth activists including some from Ireland, highlighted the disconnect between the 192 negotiating member states and demands of those seeking more urgent action.

“I have never seen the divide between what is happening between the inside of these walls and the outside so large,” said Jennifer Morgan, executive director of Greenpeace.

Those obstructing the process, however, were becoming “fewer and fewer and increasingly isolated”, according to Felipe De Leon, a climate negotiator for Costa Rica.

He hoped young people would continue to push the process forward – delegates identified Brazil, the US, Australia and Saudi Arabia as the most persistent obstructors.

The UK’s climate negotiator Archie Young said countries had told the incoming UK presidency hosting next year’s talks of their intentions to build on Chile’s efforts “and on those calling on us to go further, faster”.

“We must take people with us as we all raise our ambition in the year ahead,” he said.

“That meeting is supposed to be the moment the world responds to the climate crisis by strengthening the pledges made in the Paris Agreement.”

With a Brexit deadline of December to negotiate a trade deal with the EU, the UK’s diplomatic service would simultaneously have a huge challenge to ensure all countries arrive in Glasgow having enhanced their climate plans.

“After a year of even more extreme climate impacts, new and terrifying scientific reports and fury from school children around the world, we came to Madrid expecting countries to agree to step up their actions to tackle the climate crisis,” she added.

“Instead we got two weeks of blocking from big polluters like Australia, Japan, Brazil, the US and Saudi Arabia among others.”

Support for poor communities dealing with the worst climate impacts, known as “loss and damage” was not what we hoped for, she said. “Historic emitters spent the two weeks trying to shirk their responsibility to the poorest and most vulnerable people: those not responsible for climate breakdown.”

Marion Briggs of Friends of the Earth said: “The disconnect between governments’ positions in the negotiations, and the demands from the outside for a dramatic increase in ambition in response to the stark science, is mind boggling. The level of cognitive dissonance on display is incredible; Ireland included.”

The failure to agree rules on emissions trading under Article 6 was probably better than a bad compromise, said Sadhbh O’Neill of Friends of the Irish Environment.

“If emissions trading is to play any meaningful role in reducing emissions, there must be very high standards of environmental integrity attached to projects, a commitment to an overall reduction in emissions, and safeguarding mechanisms to ensure that human rights are not compromised,” she added.

There was a lot of talk from governments and other actors at COP25 about commitments to net zero emissions by 2050, said Cliona Sharkey, policy advisor with Trócaire but that was in sufficient.

“We need to be clear, achieving net zero by 2050 is not the same as limiting warming to 1.5 degrees. Delivering on the 1.5-degree limit demands steep near-term cuts in emissions, frontloading action rather than hoping for miracles in 2040.”