COP25: ‘If the big emitters fail, everything will fail,’ UN secretary general warns 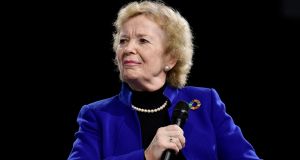 “We need to have the big emitters understanding their role is essential, because if the big emitters fail, everything will fail,” he warned in an address to negotiators and global leaders at COP25.

Carbon pollution must stop rising in 2020 and start falling to keep the Paris Agreement goals within realistic reach, he warned.

“We are a very long way behind, but there is still reason to believe we can win this race, On our side, we have the force of science, new models of cooperation, and a rising tide of momentum for change,” he added.

Countries must honour pledges made in Paris to scale up their national climate pledges every five years, starting in 2020. “We must deliver what the scientific community has defined as a must, or we and every generation that follows will pay an unbearable price.”

Major polluting countries such as China, India and the US – which is leaving the pact – are not expected to make big new announcements at the summit, where delegates remain focused on technical negotiations over rules on carbon markets under Article 6 of the agreement.

Mr Guterres, however, hoped the talks would conclude on Friday with a strong signal that governments were ready to submit more ambitious climate plans in 2020, seen as a make-or-break year for the Paris process.

Former president and climate activist Mary Robinson, who has been at the talks all week, said there was concern they were not going well, and Mr Guterres was attempting to shake things up – but also to counter big business “messing around” on Article 6.

While there was often gloom at this point, she was assured strong human rights and gender language would be included in any text, as the EU and the Chilean Presidency of the COP rallied together on this issue. Such provisions were critical “on the ground” and needed to be incorporated in countries climate commitments known as “nationally determined contributions”.

She said there was also welcome evidence some of the world’s major companies were signing up to achieve net-zero emissions by 2050 at the latest, and some by 2030. Nearly 180 companies representing more than 5.8 million employees in 36 countries had pledged to hold themselves to emission levels in keeping with the Paris agreement’s 1.5-degree target. The signatories’ commitment was science-based and had to be verified, she noted.

The same level of commitment was less evident among countries, though Ireland was among those embracing the 2050 target and joining the Climate Neutrality Coalition.

“G20 countries are still the significant problem. For more than a decade they have said they will remove subsidies for fossil fuels. They have not done it all. That is also a logjam at this COP,” Mrs Robinson added.

She said she wanted to reassure young people at COP25 “they have made their voice heard”, and globally they had helped create and shape “a bottom-up climate movement”.

The actions of businesses and investors pursuing sustainability was top-down, which meant governments were being squeezed in the middle and pressed to make more substantial commitments, Mrs Robinson said.

As chair of The Elders, Mrs Robinson has been supporting efforts to have intergenerational debate about how best to address the climate crisis, and backing efforts secure trillions of dollars in “clean energy” across the world. The Elders is a group of independent global leaders working together for peace, justice and human rights.

Climate activists twice disrupted proceedings on Wednesday to complain about the slowness of progress and lack of real commitments by rich countries in cutting emissions and providing financial supports for vulnerable countries as required under the agreement.

Police removed more than 100 mostly young protesters, some of whom were crying and angrily demanding “climate Justice” as formal talks were about to resume. They called on rich countries “to step up, pay up”.

“It’s a terrible signal to the world. If they think they can keep us out to try to roll things through, then they are wrong,” said Jennifer Morgan, director of Greenpeace International. Earlier in an event focussing on the “climate emergency”, she said the Paris Agreement was alive, but only barely so.

Already there were signs some major emitters were trying to limit the scale of what can be achieved in Madrid. “There’s an effort right now to block the words ‘climate urgency’ in text from Brazil and Saudi Arabia, saying we haven’t used these words before in the UN, so we can’t use them now,” she told the BBC. “This gap between what’s happening on the outside and what’s happening in the science, and this ‘UN speak’ that won’t react and drive something is very frustrating.”

Talks on how to cope with growing losses and damage from climate change have also been upset by an attempt by the US to insert a waiver on liability into the main outcome. The US and some other developed countries argue financial needs created by climate damage could and should be met by existing climate funds and insurance.

Vulnerable countries, including African nations, have pushed for concrete progress on providing fresh funding to help them deal with disasters and longer-term damage linked to global warming. They had called for a financing facility to be set up in Madrid for that purpose. But a draft text that is the basis for final negotiation does not include such a facility.

Blocked on that, developing countries have tabled an option for existing funds established under the UN negotiations – including the Green Climate Fund – to provide faster access to new money to help them address “slow onset events, comprehensive risk management, human mobility and non-economic losses”.

Harjeet Singh of ActionAid International said the best that could be hoped for was the creation of an expert group to look into potential new sources of finance. “Outside this room, it is [CLIMATE]chaos,” he said. Within the negotiations, “we are not matching up to, or catching up with, reality”.