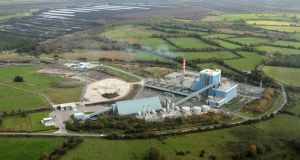 Fianna Fáil spokesman Barry Cowen said constituencies such as his own of Offaly, where Bord na Móna has a significant presence, could see its industries affected. File photograph: Niall Carson/PA Wire

Fianna Fáil has warned it will not support any carbon tax increases in the budget unless the money raised is reinvested in affected communities and measures to help the poorest.

Negotiations were continuing overnight on finalising a report for the Oireachtas All-Party Climate Action Committee, with the level of carbon taxes a stumbling block.

Barry Cowen, the party’s public expenditure spokesman, said his party would not agree to any increase in the tax unless it was allocated to fund plans to help areas that may rely on fossil fuel-related employment, as well as those at risk of fuel poverty.

The next budget, if one is passed, is likely to be the last before a general election.

Fianna Fáil on Wednesday refused to set a figure that would have increasingly penalised fossil fuel usage over the next decade.

The Climate Action Committee report, which is expected to frame climate policy for the next 15 years, is due to feed into a new whole-of-government report due to be published before Easter, and the National Energy and Climate Plan to be submitted to the EU by end of the year with a view to decarbonising the Irish economy and society by 2050.

Party sources said Fianna Fáil was in favour of the target to have increased carbon taxes from their current level of €20 per tonne to €80 per tonne by 2030, as recommended by the Government’s Climate Change Advisory Council.

However, the view at its frontbench this week was that this target – and specified annual increases – should not be set down in legislation.

It was also felt that any such tax increases would be conditional on other measures.

An earlier draft of the Oireachtas committee’s report said the Minister for Finance should introduce legislation this year which would see the carbon tax rise “to at least €80 per tonne by 2030”. Fianna Fáil is moving away from this position. Mr Cowen said people should see incentives and not just be penalised.

He said constituencies such as his own of Offaly, where Bord na Móna has a significant presence, could see its industries affected.

“Unless you have a quid pro-quo, forget about it.”