Car commuting down, cycling up, according the Dublin City Council 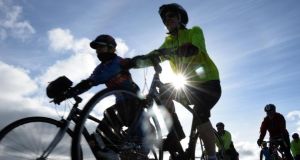 The number of commuters driving into Dublin city during the morning peak has reached its lowest level in 15 years, while the number of cyclists is at its highest according to Dublin City Council.

The council’s annual traffic count, which measures the modes of transport used by people entering the city by road between 7am and 10am, shows a huge increase in the popularity of cycling since the council starting keeping records in 1997.

Car users are still the largest group of commuters coming into the city centre with cars, including taxis, accounting for just under 60,000 of the 90,479 morning road commuter numbers. However, this figure represents a significant and steady decrease over the past 15 years with 73,561 cars coming into town at the time of the 1997 count compared to 59,916 during the morning commuter rush last year.

The count, which is taken on two days each November, measures the modes of transport on 33 routes which can be used to access Dublin city through a cordon roughly defined by the Royal and Grand canals. The count since 1997 records, cars, cyclists, motorcyclists, buses, pedestrians, and goods vehicles. The figures refer only to those using the road network, with those using Luas and rail recorded separately.

Numbers of pedestrians have remained largely stable with 16,679 recorded in the 1997 count compared to 17,495 last year.

past decade, but has fallen back in recent years and stood at 1,423 last year.