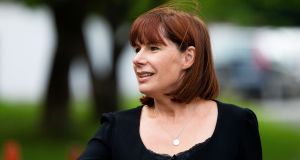 As part of the Government’s conservation plans to protect designated raised bogs, Minister for Culture, Josepha Madigan had wanted to allow nine turf-cutters who had right to cut turf on Ballynafagh Bog to carry on their tradition on a 4.6 hectare section of the adjacent Coolree Bog for a period of 65 years: Photograph: Tom Honan for The Irish Times

Plans by the Minister for Culture, Heritage and the Gaeltacht, Josepha Madigan, to relocate turf-cutters to allow them extract peat from a raised bog in Co Kildare have been rejected because the activity would add to greenhouse gas emissions.

An Bord Pleanála has turned down an appeal by the Minister against a decision of Kildare County Council to refuse her department planning permission for a proposal to allow turf-cutting at Coolree Bog near Prosperous, Co Kildare.

As part of the Government’s conservation plans to protect designated raised bogs, Ms Madigan had wanted to allow nine turf-cutters who had right to cut turf on Ballynafagh Bog to carry on their tradition on a 4.6 hectare section of the adjacent Coolree Bog for a period of 65 years.

Under a compensation scheme established in 2011, active turf-cutters on 53 raised bog special areas of conservation were either given an annual payment of €1,500 index-linked for 15 years or relocated where feasible to a non-designated bog.

The overall cost of the scheme for more than 2,300 qualifying applicants over 15 years is estimated at €54.1 million, of which €7.63 million is being spent on relocating 476 turf-cutters.

Outlining its decision, An Bord Pleanála acknowledged there were conflicting national policies applicable to the proposed development.

However, the board concluded that it was in contravention of the national climate action policy objective to achieve a transition to a low-carbon energy system.

It noted that the bogland policies of the Kildare County Development Plan 2017-2023 also sought to protect and conserve bogland habitats by limiting peat extraction to areas already under development.

Kildare County Council had also rejected the plans on the basis, if allowed, it would set an undesirable precedent for further development of inactive bogs and result in a loss of natural landscape.

The plans were also opposed by the Irish Peatland Conservation Council which accepted there needed to be a site for turf-cutters but maintained that Coolree Bog was not an appropriate location because of its complex geophysical environment.

It accused the Department of Culture, Heritage and the Gaeltacht of “poor judgment” in proposing such a site.

A spokesperson for Ms Madigan said her officials were considering the decision but would be making no further comment at this time.

Environmental campaigners welcomed the ruling but expressed concern that Ms Madigan was still proposing to spend over €7.6 million assisting turf-cutters to continue “their damaging activity”.

Friends of the Irish Environment (FIE) said a recent report on the status of EU protected habitats and species in Ireland in 2019 noted turf-cutting was continuing at many protected sites and that ongoing negative activities were outweighing positive measures.

Meanwhile, the High Court is set to issue its ruling next week in a challenge by FIE against new legislation introduced earlier this year by the Minister for Housing, Planning and Local Government, Eoghan Murphy and the Minister for Climate Action and the Environment which exempts commercial peat operators from requiring planning permission from extracting peat from sites in excess of 30 hectares.

The High Court has placed a stay on the legislation taking effect pending next week’s judgment in the case.

“Three Ministers including the Minister for Climate Change are desperately doing all they can this year to facilitate turf-cutting in Ireland when all the scientific evidence is that this activity is damaging to the environment,” said FIE director, Tony Lowes.

The Department of Culture, Heritage and the Gaeltacht said it was trying to find the correct balance between protecting designated EU sites and accommodating a very small number of turf cutters onto a damaged bogland habitat.

It claimed Kildare County Council’s approach to the issue was “a blinkered one”.