Boil-water notice issued for parts of south Dublin and Wicklow 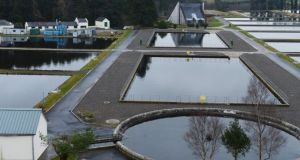 Irish Water: the company said water should be boiled in homes affected by a chlorine-booster breakdown at Vartry water-treatment plant, in Co Wicklow. Photograph: Cyril Byrne

Irish Water has issued a boil-water notice for 65,000 people in south Co Dublin and Co Wicklow. The company said affected households should boil their drinking water until further notice.

The HSE recommended the “precautionary measure” after a chlorine booster broke down at the Vartry water-treatment plant, outside Roundwood, in Co Wicklow. All of its water must have enough chlorine added to make it safe to drink.

The notice applies to all of the areas served by the plant. In Co Wicklow these include Ashford, Newcastle, Newtownmountkennedy, Kilcoole, Kilquade, Kilpedder, Kilmacanogue, Greystones, Cookstown Road, Fassaroe/Berryfield Lane, Kilcroney, Delgany and Bray. In Dún Laoghaire-Rathdown affected areas include Corke Abbey, Woodbrook Glen, Old Connaught Avenue, Thornhill Road, Ballyman Road, Ferndale Road from its junction with Old Connaught Avenue to Allies River Road, Dublin Road from the junction of Old Connaught Avenue to Allies River Road, and all areas off these roads.

Irish Water, which said water should be boiled before drinking, washing fruit or vegetables, brushing teeth or making ice, added that it will liaise with the HSE in order to remove the boil-water notice as soon as it is safe to do so. “Irish Water are carrying out chlorine dosing on the supply today and have put in place a water-sampling programme to test the chlorine levels in the impacted areas,” it said.

Irish Water was recently given planning permission to upgrade the Vartry plant; the contract for the two-year construction project is due be awarded at the end of 2018.