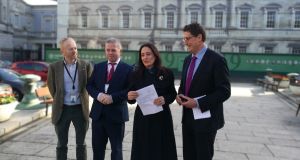 A Bill that would require landlords to test their property for radon gas and make them to take action if it is detected is to be brought before the Oireachtas by the Green Party.

Radon gas is naturally radioactive gas which is colourless, odourless and can only be detected using specialist equipment. More people die every year from lung cancer associated with radon gas than do from road traffic collisions.

Exposure is blamed for around 250 deaths in the Republic every year. Research by Prof Quentin Crowley in Trinity College suggests 30 per cent of the national building stock is a “high radon risk area”.

Testing for the gas costs less than €50 and dealing with it on detection costs about €1,000.

The Healthy Homes Bill also requires the Government to introduce regulations to require a minimum energy standard in rented homes, which would be phased in over time.

Green Party deputy leader Catherine Martin said testing for radon ought to be mandatory for all rented homes.

“The tragedy with radon gas is that in many cases the first time a family finds out it is a problem in their house is when someone gets a lung cancer diagnosis,” she said.

“Awareness of the dangers of radon and knowing if you are living in a home with high radon concentrations is key in decreasing the number of lung cancer deaths each year linked to domestic exposure to radon.

“That is why we need to change this and make testing for radon mandatory for all rented homes now. The tests cost less than €50 and they could save someone’s life. And if the gas is found then fixing it often costs less than a month’s rent.”

“Sadly lung cancer is often only caught at an advanced stage,” he said. “A key part of changing that is knowing that you are at risk.

“This Bill will let people know that they are at risk and give them the power to change it. This, frankly, is a measure that is long overdue.

“We also need to let people know the early warning signs of lung cancer which are a cough that doesn’t go away or gets worse, coughing up blood, chest pains that are worse with deep breathing, weight loss, shortness of breath or feeling tired or weak.

Green Party leader Eamon Ryan said he did not anticipate any opposition to the Bill in the Oireachtas.

“Everyone agrees we need to upgrade our housing stock to protect people’s health, save on fuel bills and reduce greenhouse gas emissions,” he said.

“Putting a minimum standard on rental properties is important because, unlike owner-occupied houses, the landlord doesn’t directly benefit from improving the energy efficiency of the house.

“Such standards have recently been introduced in the UK. We must ensure that the transition to a low carbon housing stock includes everyone, including tenants.

“While this will reduce our emissions and save people money, its biggest impact will be to improve public health and reduce the burden of disease caused by poorly insulated houses and apartments.”