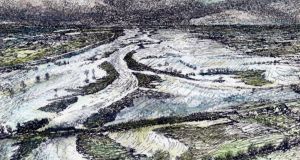 To live on a glaciated hillside, its fences and meadows skin deep and big boulders still sticking out where they rolled, is to soak up, rather literally, the interface of weather and land.

Right down the west coast, centuries of ocean rain have drained the hillsides of nutrients once created and stored beneath upland trees and heather. The soils are starved of organic matter, leached of soluble minerals – “podzolized”, as scientists say – and rendered miserably acidic.

Cart loads of limy shell-sand from the shore were once spread to balance the acid, and tractor-scattered fertilizer now tries to atone for lost humus and minerals. On some moorland stretches, early tree-felling and heather-burning left hillsides to grow thickening metres of peat.

At least, on the west coast, most downpours flow rapidly into to the sea. Inland, they flow from a bare upland rim to swell streams in the catchment of a slow and inadequate Shannon.

The floods of January 2016 have compelled yet another pledge to dredge the river, scooping out, in the words of Minister of State Seán Canney, “some of the stuff, the silt and vegetation that has taken over” and blasting some of the rocky “pinch points” that make a river different from a canal. All this, it seems, has been agreed between 10 State agencies with responsibility for the river, including its wildlife, and jointly ready to wrestle with the EU’s nature directives.

The urgency of saving lowland farms and homes pushes aside more thoughtful, long-term and radical alternatives, applicable not merely to the Shannon basin but to the rain-drenched island as a whole. Constructed wetlands promise substantial relief from gathering floods, as well as from pollution of our waterways, both high among the aims of the EU’s Water Framework Directive.

After Ireland’s ice had gone, two kinds of natural habitat were dominant. One was forests : pine, birch and aspen on the uplands and oak, ash and elm on richer lowland soils. The other was water, in myriad lakes, shallow ponds and marshes. Forests intercepted the rain, rooting deeply and retaining and recycling essential nutrients and carbon. Much of the slow surface flow was absorbed in the local wetland.

We have lost most of both habitats. In one judgment: “Probably no other country in Europe has seen its ecological base more eroded, torched, drained, grazed, ploughed and manured.”

This comes from what the Catchment Unit of the Environment Protection Agency likes to call a “newsletter” but is actually a lively and engaging science magazine. Newly readable online (at catchments.ie), its winter issue shows the efforts of “citizen science” groups to protect local waters and their wildlife. It also includes the substantial case for “wetland reanimation”.

This is from a consultancy team, Vesi Environmental, with Rory Harrington, a passionate pioneer of ecosystem hydrology, as senior scientist. As an ecologist with the National Parks and Wildlife Service, Dr Harrington worked with a group of farmers at Anne Valley, Co Waterford, to create a sloping wetland that filters farmyard waste and run-off through a series of landscaped ponds fringed with tall vegetation.

From the last pond it delivers clean water, fit for trout and spawning salmon, to the adjoining Annestown river, formerly heavily polluted and bereft of aquatic life.

Over the past 33 years, more than 100 such functional wetlands have been developed by what became the Vesi team, in State and private partnerships, along with riparian corridors of trees and newly planted forests.

On a slope of Kerry’s Mangerton Mountain grows a dense copse of Scots pines, sessile oak, rowan, birch and holly. This was planted by Harrington in the 1990s as a trial of potential mountain reforestation in the interests of water retention.

From his first ponded valley in Waterford has grown the technical sophistication of the Integrated Constructed Wetland. A widely praised example is at Castle Leslie, Glaslough, Co Monaghan, where, in a leafy quilt of ponds and streams, the sewage from a village, hotel and equestrian centre is rendered safe and innocuous by natural freshwater organisms and wildlife. (See iti.ms/2iIyOVC.)

ICWs have been adopted by Dublin City Council engineers with problems of sustainable drainage. One deals with polluted storm water in a stream that was reaching the Tolka, a well-stocked trout river, via a pond in the park. (You can download a PDF at iti.ms/2iFE3Y0.)

Sustainable drainage is the challenge of the whole Shannon basin if the river, one of Ireland’s richest wildlife zones, is to merit better treatment than a gutter. Every constructed wetland, fitted to the contours of the land, will set a brake to the flow of the rain, in a gain both for nature and the economy.