Another Life: Books to make a flower lover happy 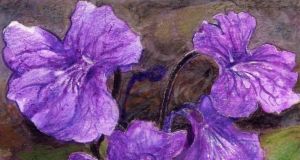 It seems I was born loving flowers, whatever that makes me, apart from lucky to find so much pleasure in the world. In an early infant memory, tiny blossoms crept across the gravel of the yard, a Brighton dustbin alley walled in Sussex flints. Pimpernel and toadflax made a fingertip bouquet of lilac and vermilion.

Evacuated to a country aunt, I rushed to sow garden seeds: marigolds and scented mignonette. When the war ended and barbed wire was rolled back from the shore, I climbed a chalk cliff to pick the clove-scented stocks that flourished in its crevices.

Given such a disposition, the midlife move to an acre of thistles and grasses, with a sheltered hollow and a stream, should have prompted grand floral designs, and did indeed do so from time to time, as visiting gardeners pressed suggestions. (Tree ferns for the hollow?)

Too late now: it would have needed another life, with less attention to growing food and perhaps a lot more money. Some gestures remain among the tangle of trees and fuchsia thickets and the hillside’s infiltrating grasses: the sprawl of cranesbill geranium, invasive tussocks of lady’s mantle, a hillock of climbing roses, a clump of miscanthus beside the boggy pond. Survivors all.

What got me started on this was a new and beautiful book from the Irish Society of Botanical Artists and the Irish Garden Plant Society. Heritage Irish Plants: Plandaí Oidhreachta (€30 from irishbotanicalartists. ) offers paintings of garden plants distinctively bred, raised or fostered on this island over the past three centuries or so, many still thriving in cultivation.

The original domestication of wildflowers and their garden elaboration has often intrigued me, suggesting basic human genes for aesthetic sensibility. But trade in exotic species may count as much. The outstanding modern chronicler of Irish garden plant history is Charles Nelson, formerly taxonomist at the National Botanic Gardens, Glasnevin. In his essay he describes Irish interest in painting “florist’s flowers” by the mid-1700s: auriculas, hyacinths, tulips and others.

The heyday of Irish gardening was in the late 18th and early 19th centuries, and worries about the conservation of gardens and their plants did not arise until the 1970s, when imports of mass-produced plants by new garden centres began taking away the trade of specialist nurseries. The trials of Northern Ireland’s noted daffodil breeders (five years from seed to flowering-size bulb) run beside paintings of some of their exquisite varieties.

Primroses, irises, snowdrops and dahlias are among garden flowers with a distinctive Irish history of breeding cultivars and hybrid forms. Botanist Declan Doogue looks at native plants that held promise, such as colour sports among the west’s rare heathers. Little could improve on the shade of the wildflower in my painting below, the richly purple greater butterwort of Kerry, but Doogue warns of threats to its boggy habitat.

A chapter on woody plants finds past collectors’ treasures still growing at Kilmacurragh, the Co Wicklow garden first planted by the Acton family and rescued from dereliction by the National Botanic Gardens. It’s also a destination warmly recommended in Wicklow Bound: A Seasonal Guide (Wordwell, €15), by Seán Ó Súilleabháin.

The enfolding contours of Ireland’s garden county drew him to live there a decade ago and, as a hillwalker and nature enthusiast, he has thoroughly attended to its wildlife, large and small. His month-by-month guide to places and things to see is enjoyably observed, with discursions from a knowledgeable, well-read life.

His December destinations have much to do with ancient stones and druidic light. They include a visit to Kilmacurragh to view the winter-solstice sunrise through an avenue of not-quite-ancient yews, or another to Glendalough to engage with St Kevin in the lonely moment when the sun dips behind Turlough Hill.

The broody but liberating heights of the Wicklows are among the hills celebrated in the vivid pages of The Mountains of Ireland (Collins Press, €30). The work of Gareth McCormack, already a widely published mountain photographer, this is the culmination of 20 years climbing up and jolting down the Irish peaks, humping heavy gear. Sometimes he bivouacked on a summit to catch the light of dawn or the slant of winter sun across snow. And sometimes it just rained.

No one has done it better, nor seems ever likely to, and McCormack paid an unjust price by developing a crippling arthritis in his knees.

The book serves him well, spreading some digital panoramas across both broad pages, flooding wild landscapes with colour and light. He finds some of the finest – and loneliest – in the Nephin range of north Mayo, Ireland’s first designated “wilderness area”, where the experience of Arctic tundra is conjured in the stillness of bog pools and the daunting scarp of hills beyond Ballycroy.

New code to cap salaries of special advisers to North’s Ministers 20:39
Gardaí making ‘good progress’ on Cork attack where man was set on fire 20:24
PSNI’s Deputy Chief Constable set to retire at end of month 20:07
Colm Burke vows ‘not to be deterred’ after Cork office was vandalised 19:47
Finding of poor professional performance against GP over thyroid cancer case 19:41