Another Life: Consensus on Irish flora and fauna no longer changing at glacial pace 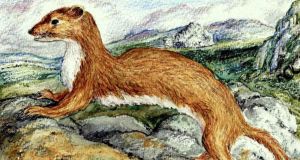 For well over a century and a half, how Ireland got its flora and fauna has been an open challenge for the country’s earth scientists. In the earliest consensus, framed in the mid 19th century, plants and wildlife must have arrived before the Ice Age, or between its glacial episodes, surviving the final freeze in open corners of the island. Later came theories of one or more postglacial land bridges across the Irish Sea from Britain or France, at a time when sea levels were some 130m lower. A deep cleft in the floor of the Irish Sea made many geographers doubt this possibility, and land bridges at any location are now widely dismissed.

In the later 20th century, research on early human colonists and trade suggested that most if not all of Ireland’s animals, and some of its rarer plants, were introduced, accidentally when not deliberately. Today’s use of DNA analysis, however, has shown that many species are genetically distinctive Irish natives, with ancient bloodlines.

This has reopened speculation about a possible Ice Age refuge, if not on the island, then somewhere to the south. Here the ancestors of at least some wildlife could have waited out the freeze until postglacial sea levels started to rise again. But their ecological requirements – their habitats and food – would seem to demand an elaborate ecosystem, a sort of Hy Brasil now vanished under the Celtic Sea.

Given the range of species involved, it needed a minimally complex landscape. This is now described in a scientific paper called, mildly enough, Ireland: An Unexpected Focus for Genetic Biodiversity and the Ecological Implications. The work of the University College Cork mammalogist Dr Paddy Sleeman, it led off a conference in Cork on postglacial colonisation and now heads the report of its proceedings. Called Mind the Gap II: New Insights into the Irish Postglacial, it is published at €20 by the Irish Naturalists’ Journal and Fota Wildlife Park, where the conference was held.

As Sleeman relates, the array of animals now recognised as being distinctly Irish, based on DNA evidence, includes an insect (the hairy wood ant), two amphibians (common frog and Natterjack toad), two bats (Leisler’s and Daubenton’s), three carnivores (stoat, badger and otter) and three potential prey species – the Irish hare, long-tailed field mouse (or wood mouse) and the red squirrel – plus, most recently, a freshwater fish (the pike).

Put this lot together in one place, Sleeman argues, and their necessary homes, diets, breeding and hibernation habits demand a landscape with broadleaf trees, grassland, heather, seeds, fruits and insects. “Small ponds would be needed for the amphibians,” he adds, “and a variety of underground, woodland and weedy pasture habitats would be needed by other animals.” A genetically Irish brown seaweed, the serrated wrack Fucus serratus, suggests a coast, if not an island.

As their organiser, with the UCC archaeologist Peter Woodman, he calls Fota’s two postglacial conferences “perhaps the most exciting such meetings in the author’s scientific life”. Other papers in the proceedings offer yet more new thinking about Ireland’s postglacial gathering of wildlife.

It has long been assumed, for example, that Ireland began with a relatively small range of species of freshwater fish, most in the salt-tolerant (euryhaline) salmonid family and able to swim into Irish rivers from the sea. Most freshwater fish can’t tolerate salt water (they are stenohaline), so any of these in Irish lakes and rivers have been assumed to be introductions.

There is clear evidence that many modern freshwater species have, indeed, been brought in by anglers, notably the carp, chub, roach and dace, But Dr Declan Quigley of Dingle Oceanword, Ireland’s leading expert on fish, especially those of the sea, now thinks that another nine may have made their own way to colonise the island. The question heading his conference paper says it all: “Did melting ice sheets create low-salinity corridors that facilitated the natural colonisation of Ireland by stenohaline fishes?”

In 2013 Debbi Pedreschi of University College Dublin, with colleagues, used DNA to compare the genes of Ireland’s pike with those of European populations. “A comparison of evolutionary scenarios,” she concluded, “may uphold the possibility that pike may have colonised Ireland in two ‘waves’, the first of which, being independent of human colonisation, would represent the first evidence for natural colonisation of a [non-sea-migrating] freshwater fish.”

Dr Quigley, looking at the ocean flows of freshwater from melting ice around Ireland, extends the possibility of a “native” heritage to such species as brook lamprey, bream, rudd, perch and nine-spined stickleback. He acknowledges that his hypothesis is “highly speculative and raises more questions than it answers”.

That may also be true of other contributions, conjecturing on the early history of our plants, birds and soil insects. For anyone interested in the origins of our wildlife, it can all be fascinating stuff.