A total boar or a pig’s pedigree?

The wild boar has its champions, but the consensus is that it’s an invasive, not native, species 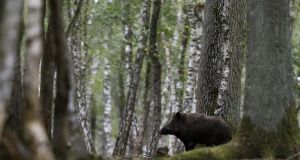 ‘Go against the boar, but it shall be as if you hunted the sea or the wind. Your spears shall break, and your hounds fly and whimper at your heels.”

The boar has always been a troublemaker. It is entangled in Irish folklore, in which it kills the mythical warrior Diarmuid. Wild boar disappeared from our forests hundreds of years before Yeats recounted this tale. Now, with numerous sightings around the country, is the boar of ancient prose living among us again?

The National Biodiversity Data Centre has recorded 27 appearances since 2009. The sightings have come from around the country, from Waterford to Roscommon. Although the total number is unknown, “there are probably sufficient animals in some places to make viable populations”, says Dr Liam Lysaght, the director of the centre.

There has been debate within the wildlife community about the status of these newcomers, which are classed as invasive species and actively culled. “Wild boar are really good breeders. If they take a foothold, they’re going to increase in numbers quite rapidly,” warns Dr Allan McDevitt of the school of biodiversity and environment science at University College Dublin. They have litters of up to 12 piglets, and populations have the ability to double or triple each year.

McDevitt is researching a number of invasive species in Ireland. He and three other scientists have published revealing research in the European Journal of Wildlife Research . They examined the genetics of the animal using markers that distinguish wild boar ( Sus scrofa ) from domesticated pig. They tested 15 boar killed by hunters and wildlife rangers and say, “We can be fairly confident these are not wild boar in Ireland.”

McDevitt says they were probably released illegally or escaped from farms. One, with a mix of markers, was found to be a “genuine hybrid”, according to McDevitt. The remainder were “nestled completely within the pig genetic cluster”, with a genetic makeup of more than 90 per cent pig. “They had all the characteristics, genetically speaking, of domesticated pigs.”


Invasive species
The Irish Wildlife Trust has been an avid supporter of the wild boar since it was listed as an invasive species, two years ago. Dr Daniel Buckley, the chairman of the conservation charity, says, “It is obviously very disappointing that the animals out there aren’t pure wild boar.” It shows that reintroducing a species “on its own bat” is not the way forward. “If they’re at the initial stages of establishment and they are easy to eradicate, then we should probably cull them.”

Removing the animals would be expensive, according to the National Parks and Wildlife Service. The genetic makeup of the swine makes no difference to its current policy. “It’s an illegally introduced species, which is an offence under the wildlife acts,” says Dr Ferdia Marnell, the head of animal ecology at the statutory body. He says there is no distinction between wild boar and feral pigs. Citing the Forest of Dean, in Gloucestershire, where wild boars have become established, he says, “We are aware of the extensive damage they have caused and the huge risks posed. The diseases that they carry would be enough to curl the hairs on the back of my neck.”

Illegal releases do not follow international best practice and could spread conditions such as foot-and-mouth disease to wildlife and livestock.

There are strict rules to follow when reintroducing a species to a habitat. The International Union for Conservation of Nature says that the animals must be “closely related genetically to the original native stock”. The genetic results demonstrate that no traditional wild boar have been captured while roving in woodland. This has closed the debate about genetic purity, but there are other areas of dispute.

Wild boar was added to the list of invasive species after recommendations in a report by Invasive Species Ireland in 2011. Daniel Buckley of the Irish Wildlife Trust says the ancient animals shouldn’t be branded in this way, as “it isn’t to do with their purity; it’s to do with their ecological impact. For it to be an invasive species, wild boar would need to have a negative impact on biodiversity.” In European forests, they are a keystone species, Buckley says. “The forest environment evolved with wild boar in it.”


Complex history
Their natural history in Ireland is complex, according to Dr Ruth Carden of Univeristy College Cork, who has researched the species. Both the wild boar and the domestic pig were introduced at several stages from the Mesolithic period, about 10,000 years ago, she says. Her research so far indicates that there are no skeletal remains of wild boar that predate the arrival of humans in Ireland.

This has implications for a reintroduction programme, as the criterion refers to “native” animals. “We presumed the wild boar were native to Ireland because of archaeological evidence, folklore and place names.”

Carden defines “native” as the establishment of a species on a land mass without human intervention. Using this definition, they would not be counted as indigenous Irish mammals. This strict definition is not always applied, as few of our mammals travelled to Ireland before human settlers. There are only limited fossil records for some species that we regard as native, including the red squirrel.

Native or not, Carden suggests that “a feasibility study would be most useful to determine if Ireland’s habitat can sustain populations of wild boar.” However, the National Parks and Wildlife Service says this is not a priority at the moment. The destruction of gardens, pitches and roadside verges reported in the Forest of Dean has damaged the boar’s reputation, and the National Parks and Wildlife Service cites this when the possibility of reintroduction is mentioned.