A plea to climate scientists: please use plain language

Government climate change experts are no masters of brevity, a new study has found 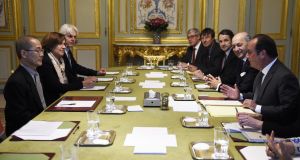 Calling all climate scientists, write more clearly! With just a few weeks before COP21, this is what a group of European researchers (from France, the UK, Germany and Italy) argue in a study published on October 12th in the journal Nature Climate Change.

The Intergovernmental Panel on Climate Change’s documents are dazzlingly unintelligible, perhaps harming the chances of political action against global warming.

IPCC experts are no masters of brevity. Once every six years they produce thick evaluative reports, totting up to several thousand pages, which lay out the current state of knowledge in their discipline. Each edition comprises three hefty volumes (treating scientific aspects, impacts and adaptation, climate change mitigation), and each volume is accompanied by a “summary for policymakers”, a digest of between 15 to 20 pages which, realistically, is the only thing to make it beyond the climate science community.

The text is discussed and approved line by line by government representatives. This process of consensus-based adoption sometimes leads to politically sensitive questions, which means editing the document can be convoluted, verging on the oracular.

It is the summaries, which serve as the basis for international climate negotiations, that Ralf Barkemeyer, an academic at Kedge Business School, Bordeaux, and his colleagues have scrupulously examined with a linguistic analysis tool. They used an algorithm to determine how unintelligible a text was based on sentence length and the complexity of the vocabulary.

“The IPCC’s summaries for policymakers are renowned for their poor readability.” Worse yet, each successive report (the first appeared in 1990, the fifth in 2013 and 2014) has been more and more opaque. This might be down to the “growing complexity of climate science, or to the assumption that the reports’ intended readership has slowly cobbled together some level of understanding”.

A press release from the Centre for Climate Change Economics and Policy at the University of Leeds goes further. “Policymakers have to have the equivalent of a doctorate in climate science to begin to understand fully the meaning of these reports,” the release claims. “Even Albert Einstein’s texts” are clearer.

“If governments can’t even fathom the scientific facts presented to them, how can they begin to reach consensus or a joint legal wording,” asks Suraje Dessai, the cosignatory of the study and academic at the University of Leeds, herself a lead author of a chapter in the latest IPCC report. “Because the IPCC summaries are so hard to understand, they can have several interpretations on the same point,” Ralf Barkemeyer adds. “They can be deliberately misconstrued, for example by climate skeptics.”

Valérie Masson-Delmotte, a French climate scientist who has recently been elected co-president of Group I (climate science) of the IPCC, finds the study “interesting”. She willingly accepts that the publications of the intergovernmental organisation, which has to be both scientifically rigorous and a good communicator, are “very difficult for non-specialists” to access.

The group she jointly presides over has already introduced, in its latest report, a “summary of summaries” or a “leaders’ summary”: a text of 20-odd lines that condenses the key points “in everyday language”. Masson-Delmotte is proposing new avenues to the IPCC Bureau, including writing different summaries based on the expertise of particular readers (energy, water, forest, buildings…) or adapting publications for new forms of reading, on tablets or mobiles. “What is difficult for governments,” she argues, “is the need to kick-start far-reaching transformations across all sectors: energy, transport, buildings…”

“The basic data - on concentrations of greenhouse gases in the atmosphere or on the projections for temperature rises – are straightforward and easily understood by governments, claims Jean Jouzel, the former head of the IPCC Bureau. “The hard part is that staying under two degrees of warming [the aim of the international community] requires us to change our development patterns completely. Every state, every citizen in the world is a stakeholder.”

The climate scientists carry out the arduous task of informing and explaining the summary to political leaders. Jouzel and his colleagues presented the latest IPCC report “over two hours, in a very simplified way” to France’s president, François Hollande. The previous president of the IPCC, Rajendra Pachauri, himself an Indian citizen, travelled the globe to publicise the report. In short, the arid prose of these climate scientist ought not to be a pretext for inaction.

The study in Nature Climate Change also examined the way that newspapers report the summaries for policymakers. It seems that, contrary to the IPCC texts themselves, media coverage has become increasingly “readable”, but also increasingly “pessimistic”. More pessimistic, in fact, than the reports from climate experts, who always make sure to give precise degrees of uncertainty or certainty to their projections. So everyone, whether scientists, politicians or journalists, should rethink their approach to the issue.

*This article was first published in Le Monde, a member of the Climate Publishers Network, a partnership of 25 international news publishers – including The Irish Times – sharing content on climate change stories ahead of the Paris summit in December. lemonde.fr/planete