A new dawn for the Dublin Docklands?

The cranes are back and construction around the docklands continues on North Wall Quay. Photograph: Sara Freund

Last year, with the Dublin Docklands Development Authority (DDDA) not quite cold in its grave, An Bord Pleanála approved Dublin City Council’s plans for a new fast-track development scheme for the docklands.

The planning powers of the DDDA, which will be formally dissolved by legislation later this year, had already been transferred to the council, but it was felt a new strategic planning scheme was needed to kick-start development after a hiatus lasting some six years.

The Docklands Strategic Development Zone (SDZ ) covers the Grand Canal Dock area on the south side of the river and North Lotts area on the north side, the parts of the docks closest to the city, seen as the most viable in terms of development and the provision of housing.

Within the 66 hectare zone, about 22 hectares are available for development and about 2,600 new homes and up to 350,000sq m of commercial space could be built. As under the DDDA, the fast track planning powers allow the council to grant development permission that cannot be appealed to An Bord Pleanála.

As the DDDA finally winds down, development in the docklands is ramping up, and at a far brisker pace than expected. A number of large schemes are shortly due to go on site, and the council has been put on notice that more are due to seek permission in the near future.

In about two weeks’ time work will start on the first of these projects, the €150 million redevelopment of the historic Boland’s Mill, just off Pearse Street in the Grand Canal Docks. The Nama-backed development involves the construction of three new office and residential blocks up to 15 storeys in height, and the restoration of the five original, but now derelict, mill buildings.

The next major development likely to go on site towards the end of the year is larger still, a €450 million development on a site stretching from Sir John Rogerson’s Quay on the south side of the Liffey back through to Hanover Quay at the canal basin. Targeted Investment Opportunities, a consortium of US investment group Oaktree Capital Management and Irish construction company Bennett, were last April granted permission to develop this site, formerly the Kilsaran Concrete works, for offices up to seven storeys and 158 apartments, which again will be developed with the assistance of Nama.

This is the largest available site in south docks at almost two hectares, and also the last along the river at the corner of Sir John Rogerson’s Quay and Britain Quay.

This scheme, which will be called Capital Dock, is being assessed by the council but a decision is expected shortly, Ms Scully said. It is also a Nama-supported project. 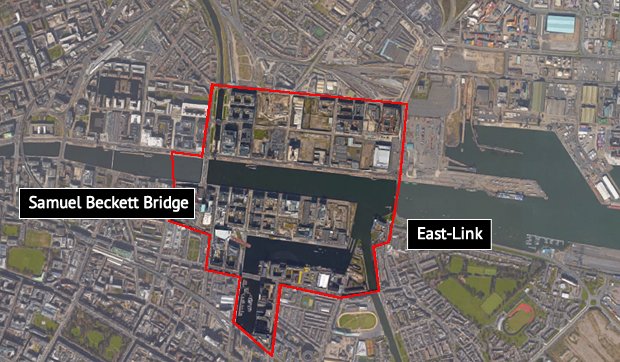 “In all, Nama has an interest in between 70 and 75 per cent of the land governed by the SDZ and so it’s a major player and from our point of view it’s positive because it allows co-ordinated delivery of the projects and much earlier phasing.”

The involvement of Nama in 15 of the 20 sites in the development zone also prevents developers from shirking their responsibility to provide infrastructure on their sites, not just utilities, but facilities such as public parks.

Development south of the river has taken off first but it’s the North Lotts where the real potential is, with almost 18 of the 22 available hectares on the north side of the river.

Project Wave is the largest planned development, wrapping around the shell of what was to be the Anglo headquarters, now being remodelled for the new Central Bank, but several other substantial projects are imminent. Receivers Ernst & Young lodged applications for two developments in the past two weeks. One is a seven-storey development on Sheriff Street and New Wapping Street which would see the construction of 165 apartments.

The other involves the refurbishment of the old British Rail Hotel on North Wall Quay and its expansion with a new eight-storey connecting hotel building, along with two office blocks up to nine storeys high.

The council has been put on notice by Nama of two more developments which will be sought shortly, both in the Point Village area. One would see the development of an accommodation complex for 800 students, while the other would be for a landmark building of approximately 20 storeys on the site of what was to be the tallest building in Ireland, Harry Crosbie’s “Watchtower” which never made it to construction.

It is more than three years since Phil Hogan, who was then minister for the environment, announced that the Dublin Docklands Development Authority was to be abolished and its powers and assets transferred to Dublin City Council.

Several deadlines for the quango’s abolition have since come and gone, but legislation allowing for its dissolution is expected to be passed by the Dáil this autumn.

The council is already in charge of the area through the Strategic Development Zone (SDZ) fast-track planning scheme. However, what the formal dissolution Act allows is the transfer of the DDDA’s assets. It will also have to take on its liabilities .

Dublin City Council has identified €5 million in docklands assets and €3 million in cash which it expects to secure. However, it will also take on costs, notably in relation to the operation of the Jeanie Johnston.

The DDDA was set up in 1997 to govern the regeneration of the former industrial lands of the city’s east end.

The area under its remit was substantially larger than that covered by the new planning scheme at more than 500 hectares stretching from Butt Bridge to the Poolbeg power station on the south side , and on the north from Amiens Street to East Wall Road.

While the image of the authority is now severely tarnished, it did, at least before the property crash, fulfil a substantial part of the development remit, particularly in the areas closest to the city centre, which the council is now concentrating on.

Some two-thirds of the area now governed by the SDZ had already been developed under the governance of the DDDA before the council took over.

It was its involvement with property developers and Anglo Irish Bank, and the huge financial liabilities it assumed on behalf of the State that eventually scuppered it.

After two unfavourable independent reports the decision to abolish the docklands authority came after the Comptroller and Auditor General found “serious shortcomings” in its activities, particularly in relation to the purchase of the Irish Glass Bottle site in Ringsend.

The site was bought for €412 million by a consortium that included the authority, but was valued last year at €45 million.

The State’s exposure through the authority totalled €52 million.

Refill shops, a bill per clothes wash: What will a circular economy mean for you?

1 Why does the small TUV party frighten the DUP so much?

4 Gaza strikes: ‘Most of these children were with their families inside their homes’

Refill shops, a bill per clothes wash: What will a circular economy mean for you? 05:00
HSE hack will cut lives short due to delays in diagnosis, doctors say 03:00
The ‘gaping gap’ in Ireland’s airspace defence 02:00
Varadkar to call for additional Covid spending on health to be maintained 01:47
Miriam Lord: Is Darragh O’Brien finding his feet in housing? 01:29