With a month to go the exams, I feel nervous – and emotional about the end of adolescence 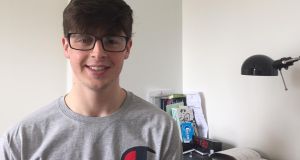 Joseph Long: ‘I have felt directionless, hopelessly unprepared, panicked, defeated, out of my depth and completely shattered – and any combination of these feelings would not be untypical to experience each day.’

At the time of writing, my Leaving Cert exams start in less than 30 days.

Also, at the time of writing, I calculate that I began my second-level academic career at Saint Peter’s College about 2,070 days ago. So less than 2 per cent of my school tenure remains.

Who was it that said that 2 per cent was negligible?

Without question, it is scary preparing for and actually sitting exams, and the associated tension can be nerve-wracking, especially as the run-up to June has been so long.

Obviously, the fact that the sands of school are fast emptying is a reality that weighs heavily on my mind right now. The approach of the exams surpasses all other concerns in my life, as the inevitable start date marches closer and closer by the second.

But that is not all the Leaving Certificate is to me: stress and anxiety. For me, it is also a catalyst, triggering memories at random of my adolescence as my subconscious tries to grasp with the fact that the end is finally here.

Maybe I stand alone in appreciating the emotional power that the Leaving Cert exerts over students, or maybe everyone else is just too cool to admit it, but I have no doubt the situation is the same for every single one of the class of 2019.

As a result of the Leaving Cert being the menace lurking in the shadows during the most carefree and lazy six years of our lives, it has been easy to resign to the thought that it will always be, forever, far away and that time will always be on our side.

But forever is over, and this sobering realisation can be overwhelming for most students – myself included.

I am not going to sit here and pretend I haven’t ignored the warning signs. But everyone seems to start too late. I think it’s mostly because the sooner you start, the sooner you admit to yourself that the fun is over and it is time to work.

For example, I have felt directionless, hopelessly unprepared, panicked, defeated, out of my depth and completely shattered – and any combination of these feelings would not be untypical to experience each day.

However, the strength of these emotions can also be a threat to an experience which is unique to this time in our lives, and just as important.

Because of how frantic this crunch-time becomes, students may not make the time and space for themselves to embrace the end of this period so often described as the “best years of our lives”.

Somehow, over the past few weeks, I have felt the emotional effects of the Leaving Cert more so than the stress of it. Maybe this is because I still have not entered into the crunch time zone and so, with my rose-tinted glasses, can still look back before the omni-present era of the Leaving Cert. In moments when I should be studying the hardest, I find myself slipping into daydream memories of when I was desperately scribbling a copy of someone’s homework into my own while hiding in the toilets seconds before class began. Or when, in first-year, I would study for hours for a meaningless 15-minute quiz. All memories I cherish.

I tell myself that part of the challenge of coping with the Leaving Certificate’s ability to shock my priorities into order is an ability to look back at more innocent times when what mattered in life was acceptably skewed, and when my future wasn’t on the line based on the next set of tests. This, of course, is how I perceive it to be now.

So, on a personal level, I have managed to find some good in my preparations for the Leaving Cert.

Beneath the stress and uncertainty that the exam inflicts on students, it is also highly symbolic. Not so much as the finish line of forever teenage-hood – as well as my secondary school life – rather as marking the end of life’s first chapter. The introduction. The tutorial. And as much as it may sound like a cliché, the start of a new life.

The Leaving Cert exam is a rite of passage for everyone, and most pass with flying colours.

When the results come, many students will trump my points, and others won’t, but the true value that I have gained from the Leaving – less than 30 days away – is in the form of the 2,000 days of memories that I have made on my way to the exam hall.

Now, even the bad times seem good, and the good times seem perfect. I know that I’ll always remember the cameos and different characters that made the journey with me.

But if I could do it all over again after my exams finish, I wouldn’t. I wouldn’t want to risk changing anything. And, of course, only a true psycho would want to endure these exams again!