Teachers estimated to have lost between €1,000 and €3,000 following pay freeze 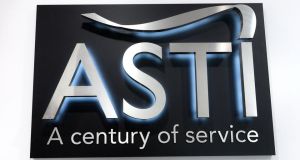 It is estimated that the combined cost of losses for ASTI members totals about €15 million. Photograph: Brenda Fitzsimons/The Irish Times

The Association of Secondary Teachers Ireland (ASTI) estimates that thousands of its members have lost up anywhere between €1,000 and €3,000 following a nine-month freeze on incremental pay increases.

Kieran Christie, the ASTI’s general secretary, said the fact that nurses did not suffer any financial penalties during their recent industrial action further highlighted the unfairness of the measure.

It is estimated that the combined cost of losses for ASTI members totals about €15 million under measures contained in financial emergency legalisation, known as Fempi.

“This is about fairness, it’s about treating everyone equally in a Republic. The idea that you can differentiate between one group and another using the same legislation is not sustainable. It is disproportionate and arbitrary use of the law.”

On foot of a High Court hearing this week, the union says it has served a plenary summons on the Government in relation to the issue.

Minister for Education Joe McHugh told the ASTI’s annual conference last week that the Government will sit down and talk on the issue.

“There has been €15 million in terms of payment lost, and I’m confident that when you bring people around table to talk on any difficult issue, you can make progress,” he said.

The amounts of the losses involved vary depending where an individual teacher stood on the pay scale and the date on which their increment was originally paid.

However, the union estimates that losses are around €1,000 at the low end of the scale and could be as high as €3,000 or more in some cases.

He said the options included a judicial review of the Government’s decision to implement provisions of financial emergency legislation (known as Fempi) in an arbitrary manner.

He said the union was also looking “at the possibility that we may be able to consider an action for breach of ASTI members’ constitutional right to equality provided by Article 40.1 of the Constitution”.