Half of second-level teachers under-35 employed on temporary basis, says TUI president 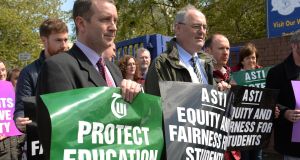 TUI president Gerry Quinn (left) seen in this file photo of a teachers’ protest in May this year. Photograph: Cyril Byrne/The Irish Times

Reduced pay and low-hour contracts are resulting in young teaching graduates leaving from the profession in favour of better-paid and more secure work, a teachers’ union has claimed.

The Teachers Union of Ireland said many young teachers are applying for “fragments” of jobs and that half of teachers under the age of 35 are now employed on a temporary basis.

The union’s president Gerry Quinn said young teachers were looking elsewhere for work because of reduced pay rates for new recruits and a “rampant casualisation” of the profession.

“While the salary scales of all new entrants to the public service were targeted, reductions for teachers’ pay were far greater than what applied to most public servants,” he said.

He said those who entered the profession from February 2012 have been placed on a reduced pay rate of up to 22 per cent less than those appointed prior to 2011.

Many young teachers were working on a part-time basis and struggling to makes ends meet, Mr Quinn said.

He said these teachers “experience income poverty, often struggling and sometimes failing to pay the rent”.

Mr Quinn said it was little surprise that graduates who qualified to teach in certain subjects were reluctant to undertake the required additional two-year postgraduate masters in education- at a cost of around € 10,000 in fees.

“They can earn considerably more in industry, start work two years earlier and enjoy full hours, better job security and promotional prospects from the start of their career,” he said.

“For a variety of compelling educational, economic and social reasons, the quality of teachers entering the profession must be maintained.

Key to this is a return to equal pay for equal work.”

Ahead of the general election, the TUI is calling on political parties and independent candidates to commit to a full equalisation of pay.

The alternative, it maintains, will result a drain of the best young graduates away from the profession at a time when they are most needed.