Why ‘low-tech’ schools are trending

Digital gurus are shielding their children from technology, while new research show pupils learn better from books. No wonder parents are looking to tech-free options 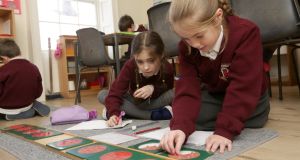 They may have helped change the world with their innovative research and rapid advances in technology, but many tech gurus have gone back to basics when it comes to educating their own children.

Bill Gates, former chief executive of Microsoft, has revealed he restricted his children from playing computer games and they only received their first phone at the age of 14.

Even in Silicon Valley – the nerve centre of the technological revolution – experts behind the technology we use on a daily basis are opting for “low-tech” schools to shield their children from overexposure to screens.

“You can’t put your face in a device and expect to develop a long-term attention span,” said TaeWoo Kim, chief artificial intelligence engineer at One Smart Lab, in an interview with Business Insider.

It’s a finding which, increasingly, is being reflected in research. An analysis of how more than 170,000 people are learning across Europe shows young “digital natives” are much more likely to absorb lengthy information from printed books rather than screens.

It found books were the preferred reading medium for both children and young adults when reading novels and longer-form articles. In addition, young readers were more likely to skim longer pieces of text when using iPads or e-readers, especially when under time pressure.

Dr Ann Marcus-Quinn, a lecturer at University of Limerick, who is part of an EU-wide research team, says the findings have implications for how students learn both at home and in the classroom.

“Just because young people can master electronic devices doesn’t mean that they have the critical skills to interpret texts,” she says.

While few deny that being computer literate is vital in today’s world, many are moving away from the “iPad for every schoolchild” phase and are seeking schools which promote learning through play, imagination, interaction and good old-fashioned books.

There is a rise of such schools in Ireland and The Georgian Montessori Primary School in Dublin prides itself in being “low-tech” school.

Children do not sit at their desks all day looking at screens; instead, they say, children’s natural desire to learn is encouraged.

“We are definitely a low-tech school – we don’t use interactive white boards and electronic equipment such as laptops or tablets are only used when information cannot be found in printed format,” says Suzie O'Neill, the school principal.

“Unique learning materials invite small and larger hands to take on new challenges, one concept or skill at a time, and our use of tactile and specialist materials is the polar opposite of any existing electronic device.”

She says Montessori teachers support and guide rather than instruct, linking each child with activities and materials appropriate to their interests, needs and developmental level.

“Physical experiences develop different neural pathways than would be developed by looking at letters on an electronic device or researching topics on the internet,” says O’Connell, whose school opened in 2015.

“There are waves of research highlighting the dangers of over-exposure to technology so it is unsurprising that those at the forefront of the technical revolution are keeping their children away from screens for as long as possible.”

Pearse O’Shiel, chairman of Lifeways Ireland, the patron body for the three recognised Steiner national schools in the country, agrees

“It appears that those closest and most directly involved with the technology which has become pervasive in our lives are most aware of its effect and the consequent possible damage it does to children,” he says. “This potential for harm is both psychological and physical.

“What parents do in their own homes is not directly the business of the school. However, parents choose the schools based on the pedagogy which places the child at the centre of the school’s concerns.

“In general, our practice is to introduce children to technology they can understand and master. Much of this is achieved in handwork lessons and this embodied learning in which the children are active physically and intellectually provides a sound basis for a later relationship with digital technology in which the young person is master of and not slave to the digital world.”

“We are not anti-technology but we don’t have a need for it,” she says. “Our method is based on physical materials which are designed to be interesting and inviting and allow the children to move from concrete to abstract theories very easily.

“Montessori is very strong in Stem, particularly maths, and some countries are now investigating how the Montessori maths curriculum can be integrated into mainstream maths teaching.

‘Going against the grain’

“Families which choose to send their children to Drumnigh are already going against the grain and there is no expectation of what is ‘normal’. So it is very unlikely a child will come home saying ‘everyone in my class has a phone except me’.

So, what are the official policies for most schools on use of technology?

A spokesman for the Department of Education said the decision to use technology, including smartphones or tablets, is a matter for the board of management of each school.

“Where the introduction of new technology is planned, there should be consultation with all members of the school community, including parents,” he said.

“The Professional Development Services for Teachers’ Technology in Education, which operates under the remit of the department, provides a range of support services for schools on the effective use of digital technologies in teaching, learning and assessment.”

The spokesman said the department’s five-year digital strategy for schools reflects its current policy of embedding digital technologies in teaching, learning and assessment.

“It sets out a clear vision [for the 2015-2020 period] focused on realising the potential of digital technologies to transform the learning experiences of students by helping them become engaged thinkers, active learners, knowledge constructors and global citizens who participate fully in society and the economy,” the spokesman said.

While many studies show children learn better from books for longer-form articles, Dr Marcus-Quinn has cautioned against ditching technology entirely.

She says engagement and learning from shorter texts – such as poetry – can work better on screens when there is through-put into how the content is presented.

The new medium has its strengths and weaknesses, though it seems we’re still finding out what, exactly, they are.

‘Too much technology risks neglecting painting, singing or sports’ Catherine and Colin Melody send their five-year-old daughter Arianna to The Georgian Montessori School in Dublin.

While the lack of focus on technology was not a deciding factor when choosing their child’s education, they believe too much tech isn’t good.

“Too much technology would mean something else is being neglected, which is particularly impacting at an early age – so as with many things, balance is key,” says Catherine.

“We have let the kids [Arianna and Ethan (3)] have our phones and tablets for playing games or to watch a programme.

“An ideal balance would be to allow them to explore and use technology but not in neglecting other activities from painting to singing to sports – but what they don’t get in school they will pick up at home.”