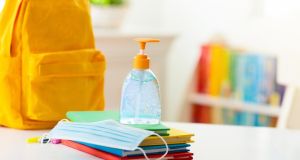 The number of students in a class deemed “close contacts” of pupils who test positive for Covid-19 will be “variable” to each classroom and school, the HSE guidance states. Photograph: iStock

All pupils in a class will not automatically be referred for testing if there is a confirmed coronavirus case in the classroom, according to health guidelines for schools reopening.

The number of students in a class deemed “close contacts” of pupils who test positive for Covid-19 will be “variable” to each classroom and school, the HSE guidance states.

In primary schools where pupils will be divided into smaller “pods” within the class, all those within the pod grouping of a confirmed case will likely be deemed a close contact and required to self-isolate while referred for testing, the guidance states. However, students in other “pods” in the same classroom will not necessarily be deemed close contacts, it states.

At second level the number of students deemed to be close contacts of a case will depend on the size of the classroom, and how close their desk was to the confirmed case. It will also include other factors such as if the pupil is in the same friend group of the confirmed case.

HSE guidelines prepared for how to manage confirmed cases and outbreaks state there will be “no blanket policy to test entire classes or years.”

Decisions around how many pupils are to be deemed close contacts will follow individual risk assessments, the guidelines state.

The criteria for how many pupils will be referred for testing will be expanded based on how many days the student spent in school, and if they tested positive after showing symptoms while in class.

If a pupil begins to display symptoms, such as a cough or fever, schools are advised to isolate the child in a “pre-identified place” which has “good ventilation and preferably an outside window opened,” the guidance states.

Parents will be contacted by the school to collect their child, and then asked to consult with their General Practitioner (GP), who will decide whether to refer the child for a Covid-19 test. Schools are asked to bear in mind some children often have a persistent cough or cold throughout the year.

Dr John Cuddihy, director of the Health Protection Surveillance Centre (HPSC), said “fast track testing” will be in place for pupils and staff at schools. Results from test swabs would be expected to come back in 24 hours, or 48 hours at the latest, he said.

If a child or teacher has been removed from a class following coronavirus symptoms, the parents of other children do not need to be informed, the guidance stated.

If a child tests positive for Covid-19, the parents of the pupil will be informed by the HSE, and not the school. The HSE will then inform the identified close contacts of the case, based on an assessment of the classroom layout and other factors, and advise parents of those children what steps are required.

Close contacts are required to self-isolate at home and are tested for coronavirus, and then tested again seven days later.

Dr Abigail Collins, HSE consultant in public health medicine, said schools would be permitted to inform all parents if there had been a confirmed case in the facility, and advise them that if pupils were identified as close contacts parents would be contacted by public health officials.

Dr Collins said public health officials would not use a “one size fits all” approach when it came to dealing with cases or outbreaks in schools.

The guidelines, sent out to schools on Thursday, outline when public health officials may require the entire or partial closure of a school in response to an outbreak.

Decisions to close a school will be based on a number of factors, including the number of cases detected among staff and pupils, the physical layout of the school and its ability to increase social distancing or hygiene measures, the guidelines state.

School closures may follow “evidence or concern that spread within the school is the primary driver of cases, or suspect cases,” it states. This would be where the virus is suspected of spreading within the school, rather than confirmed cases among staff or pupils being linked to transmission in the wider community.

Decisions to close schools would also follow “any evidence that significant spread in the wider community can be shown, or be highly suspected, of being linked or intertwined with the educational facility setting,” the guidance states.

“Each educational facility Covid-19 outbreak will be assessed on an individual basis and a unique decision made as to whether it is safe for the facility to remain fully or partially open,” the guidelines state.

Dr Ronan Glynn, acting chief medical officer, said they expected cases among young people and school pupils over the coming weeks. “There will be anxiety, there will be concern, there will be rumour and misinformation,” he said.

Professor Philip Nolan, chair of the National Public Health Emergency Team’s modelling group, said people “overestimate the amount of contact that actually occurs in school settings,” and as such entire classrooms should not be deemed close contacts of confirmed cases.

“It’s been studied and we don’t have close contact with all the other 25 kids in our class every day, it’s actually much more closer to three to five,” he said.