What to study to prevent robots stealing your job 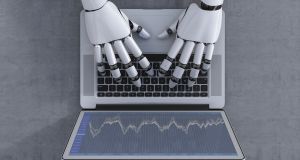 Some 44 per cent of companies that reduced their number of employees since the global financial crash in 2008 did so by means of automation. Photograph: Getty Images

Beware of the robots – they are on the rise and could be after your job. It might sounds like something from an outlandish sci-fi movie, but the figures are all too real.

A report by McKinsey Global Institute shows that 44 per cent of companies that reduced their number of employees since the global financial crash in 2008 did so by means of automation.

Those most at risk include workers in transport and logistics, production occupations, administration and services. But many highly skilled disciplines could leave graduates vulnerable to being replaced by machines in the future.

Accountancy and finance personnel, and to a lesser degree, chartered surveyors and auctioneers are just some examples of occupations at a higher risk of being replaced by artificial intelligence software, principally because they are industries built on processing data.

For example, Chicago-based company Narrative science uses software powered by artificial intelligence for companies that goes beyond reporting the numbers; it creates perfectly written, meaningful narratives for any intended audience. Forbes, the business and finance magazine, now uses this software to generate reports on company earnings.

A company called Kensho uses software that can find answers on questions on company reports and global economic data in a matter of minutes – something that would take highly paid finance graduates many hours to do.

It may all sound gloomy for the graduates of tomorrow. However, some economists argue that if massive automation of jobs happens it doesn’t mean that massive unemployment is inevitable.

When cars displaced coachmen and stable boys, for example, many new jobs in highway and road construction were created.

And while computerised trading has reduced the numbers of stockbrokers who trade over the phone, new programming jobs designing new trading algorithms have emerged.

Accountancy and finance are by no means the only highly skilled professions at risk. In a recently published book, The Future of the Professions – How Technology Will Transform the World of Work, authors David and Richard Susskind argue that increasingly capable machines could replace even relatively highly skilled jobs such as doctors and lawyers.

In the UK alone, up to 100,000 legal jobs will be automated in the next 20 years, based on research by Times Higher Education. Artificial intelligence is now used to find answers to legal queries in seconds. No more lengthy – and very expensive – wading through case law.

The transportation revolution and electrification of the early 19th century lowered costs of shipping, raised productivity and market size and raised demand for skilled blue-collar and white-collar workers.

However, even though the numbers with higher education qualifications continue to grow, high-skilled workers are moving down the occupational ladder pushing low-skilled workers out of the labour force.

One-third of US graduates in science, technology, engineering and maths are in occupations that do not require a degree.

It’s worth noting, of course, that labour and work patterns have never really stood still. At the turn of the century, agriculture employed half of the American workforce. Today only 2 per cent are employed in agriculture thanks to changes in agricultural production.

Manufacturing employment ended up absorbing many of those ex-farm workers and services absorbed ex-manufacturing workers.

But in his book Rise against the Robots: Technology and the Threat of a Jobless Future, Martin Forde is, to say the least, pessimistic about the IT revolution. He argues that the “creative destruction”, while creating wealth, is destroying the demand for work and carries with it a multitude of social costs.

Some of these trends are unfolding in higher education. Big data is beginning to revolutionise education, traditionally a labour-intensive sector.

Some universities such as MIT have embraced this “massive disruption” to universities and have 100 million learners and increasing by one million each month. The cost-effectiveness of these Moocs is appealing because administration and layers of academic leadership roles take up over 50 per cent of third-level funding. They also have the capacity to significantly depress the cost of getting a degree.

Big data is also gobbling up traditional posts. Computers have the edge in managing big data calculations and are able to detect patterns in big data better than humans. And they don’t need to sleep, eat or rest and are free of irrational biases.

Studies, for example, show that judges are substantially more generous in their rulings following a lunch break, demonstrating that computer algorithms can be more impartial that humans.

In healthcare, computers are using big data (medical evidence reports, patient records, etc) to compare individual patient symptoms, genetics, medication history and family history to diagnose and provide the highest probability of successful treatment. As Dr Gregory House might say, “Who needs to go to medical school when you have wifi?”.

Jobs linked to a specific degree, like architects, are less at risk than the accountant, which is open to graduates from many backgrounds.

The advantage humans have over machines so far is social intelligence, empathy and creativity. Perhaps it is the study of the humanities and liberal arts – so often sidelined in the rush to promote Stem subjects – that will provide the more flexible, creative and future-proof graduates.