What makes a great school principal? 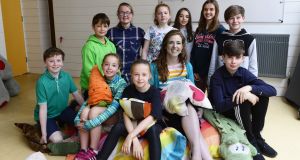 Rosemarie Stynes, principal of Ranelagh Multi-Denominational School, with some of her students. Photograph: Cyril Byrne

There’s a line in Grease that stuck in the minds of us teenagers enthralled with the classic high-school musical. Rydell High’s Principal McGee used it to sign off her announcements.

“Remember,” she’d assure students, over the class intercom system. “You’ve not only got a ‘prince’ in principal, but there’s a pal there too.”

It may have been cheesy, but it was magical to Irish ears.

So: this is how principals acted in American high schools! Communicative, open, ready to reach out, human enough to make embarrassing attempts at being relatable to students?

It was the antithesis of what we were used to on this side of the Atlantic – at least up to the early 1990s.

For us, the school principal was the scary figure you lived in fear of being sent to, an authoritarian, disciplinarian, nearly on a par with the dreaded Inspector.

It was at odds with the actual role of a head teacher; leading, teaching and promoting the school, juggling the welfare of students, staff and parents every day.

Being a head teacher means hard work and grave responsibility – the buck stops with you, and if anything goes wrong, it’s the State you have to answer to.

Thankfully, the image has softened somewhat over the decades, and today’s school leader is far more likely to be spotted greeting pupils in the yard each morning, instead of the other side of a closed principal’s office door.

Their importance in the school system received a kudos boost in recent years with the establishment of the Centre for School Leadership (CSL) in 2015, by the Department of Education.

The CSL’s mission is to ensure the provision of personal development opportunities for principals throughout their careers; from the aspiring head, to the newly-appointed principal, to the serving school leaders, all with the aim of improving learning outcomes.

They run mentoring services for newcomers and provide support for established principals.

The establishment of the CSL – at a cost of €3million – is recognition that the role of the principal is vital, and that his or her strength and capability affects the potential of every pupil in a school.

But what is it that makes a good principal? What leadership qualities are needed in the education field?

While we instinctively think of principals as being older lemons, full of wisdom and with decades of experience, that’s not necessarily the case.

One of Ireland’s youngest principals is Rosemarie Stynes (29), in charge at Ranelagh Multi-denominational School (primary) in Dublin 6.

Stynes, from Kildare, graduated in 2008 and was made principal less than a decade later. How?

Being thrown in at the deep end seems to have been a career catapult. She started out in Bracken Educate Together in Balbriggan, Co Dublin, one of the most disadvantaged in the country, which grew from 100 students to 400.

“The school was only a year old when I arrived, and 90 per cent of children spoke English as an additional language. Many families had suffered trauma before their arrival,” she says.

“It was a steep learning curve – challenging, but great for me as a young teacher. It taught me how to think outside the box and find ways to bring parents and children on board.”

She went from teacher to home school liaison officer to deputy principal, and opened an autistic unit along the way.

Stynes reckons leadership skills shine through and a good principal will encourage them in a teacher.

“Be willing to try new things, show initiative, bring a new vibrancy, get involved in new programmes, do things differently, stay up-to-date and challenge yourself,” she says.

Barbara Ennis, principal of private girls secondary Alexandra, in Dublin’s Milltown, says knowing everything about your school, and each of its pupils, is key to being a good head.

“Know each student personally. Be friendly and approachable, but at the same time, be respected. Have a strong presence in the school, be visible. Ensure that good discipline is kept, in the student and staff body.

“Have a thick skin – if you crave love, it will be your downfall. A good principal puts the student welfare at the centre of everything, cares about young people and their world and shows an interest in their interests.”

Ennis bears in mind the findings of Dr Daphne West, Chair of the Girls Schools Association (UK), who researched what makes a good principal in 2006. Children told her: “A good head teacher has big ears so she can hear any mean things that students are saying, long arms so she can care for her students, and wears high heels so she can be seen at assembly.”

Gerry Mooney, principal of Synge Street boys primary school, off Camden Street in Dublin, believes vision is vital: “A good principal must have a vision of what’s to be done for the greater good of the children in the school. He or she enables others, reflects the communal beliefs in a better world, and essentially is an agent of change in a school where life-changing and enhancing opportunities are open to all.”

John O’Donovan is the popular head teacher of St Joseph’s Secondary School in Ballybunion, Co Kerry, a co-ed of 320 pupils.

He said: “In secondary, the main thing is the care of the student. Parents want them to be happy and cared for; there’s so much outside influence and pressure, they want the child to develop holistically, that’s the main priority.

“As a principal, you need integrity, and to be approachable, hard-working and visionary. Be conscious of the school community – for example, parents went through a difficult time during the recession, and all this has impact on the kids at school.”

He introduced a counselling service in St Josephs and says the pupils have found that it really helps to have a trained mental health professional on site to talk to about concerns.

He’s aware of challenges of the internet and social media for teens and has asked parents to operate a 9pm watershed on devices in the home. The school is considering becoming a mobile-free zone next year.

The Centre for School Leadership’s national director Mary Nihill, school principal of Calasactius college in Oranmore, Galway, says principals need support for what is a very complex and demanding job.

“Research shows school leadership is second only to the quality of teaching, in terms of good learning outcomes for students – which is what you want, ultimately. So, investment in this area is very productive and positive, and it’s great that the Department is recognising that,” says Nihill.

She said there’s one thing you can’t teach: the ability to have positive relationships with people; parents, students and staff. You are either adept at managing relationships, or you’re not.

“A lot of other stuff, principals can learn; how to deal with paperwork, legislation, how to be good at time management. But you need to have excellent interpersonal skills.”

A similar role to the principal is director of studies in language schools. One such director is Eleanor O’Carroll, author of academic textbook Train The Trainer, who has worked in Ireland and overseas as the head of TEFL schools.

“What makes a good manager is patience and understanding with staff, being firm but fair. You need to listen to students, staff and parents and be calm and professional at all times. Change needs to be implemented clearly and transparently with staff input and phased in gradually.

“You must be the eyes and ears of the school and be a visible presence. Have an open-door policy with staff and colleagues. Take an active interest in the children not just pedagogically, but pastorally.

“Be the first in in the morning, and the last to leave.”