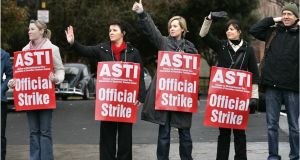 Association of Secondary Teachers in Ireland (ASTI) members, above, involved in a previous dispute. The fact the ASTI now stands isolated on the issue of working Croke Park hours strengthens the Government’s hand – if it can persuade the union to sit down to talks, that is. File photograph: Dara Mac Dónaill/The Irish Times

There’s a fair chance Minister for Education Richard Bruton let out a big sigh of relief on Monday evening.

The Teachers’ Union of Ireland’s (TUI) decision to accept a Government deal averts the prospect of all-out war with teachers.

It also means the Lansdowne Road agreement – which has been creaking under the weight of calls for pay restoration – can be taped back together for now.

But the prospect of school closures and industrial relations conflict remains.

The decision by the Association of Secondary Teachers in Ireland (ASTI) a fortnight ago to reject these extra “Croke Park” hours is likely to be seen as a repudiation of a collective agreement under financial emergency legislation.

This would trigger a range of penalties worth up to €31,000 for teachers over four years.

These projected losses would be made up of increment freezes, non-payment of money for supervision and substitution duties which were to be restored from September, and the withdrawal of improved pay scales for new entrants.

The fact the ASTI now stands isolated on the issue of working Croke Park hours strengthens the Government’s hand – if it can persuade the union to sit down to talks, that is.

The ASTI has been gunning for conflict on this and other issues and – until recently, at least – has not been in any mood for compromise.

For the TUI, meanwhile, the result is a vindication of the union leadership’s strategy of constructively engaging with the Department of Education.

It faced criticism from more militant internal elements over its recommendation to members to vote in favour of the deal.

The scale of the vote in favour – 63 per cent to 37 per cent – shows that argument had little traction with the majority of members. They now stand to benefit from pay increments and payments for supervision and substitution from this autumn.

They also retain benefits such as a shorter time to achieve permanency.

In return, they will continue to work an additional hour a week (Croke Park hours) and abide by the Lansdowne Road agreement. However, they will have the option of using more of these hours for personal use or training, rather than staff meetings. This was a bugbear of teachers.

While one battle has been averted, another looms. Bruton and the Cabinet must soon decide if they consider the ASTI – on foot of its vote – to have repudiated the Lansdowne Road agreement.