Thousands of Junior Cycle exams scripts unlikely to be used 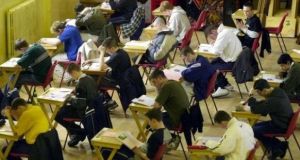 Junior cycle exams proposed for September look set to be abandoned in favour of school-based assessments during May, according to well-placed sources. File image: Eric Luke/The Irish Times

Hundreds of thousands of Junior Cycle exam scripts are unlikely to be used under revised plans to hold school-based assessments for students in schools during May.

Last month Minister for Education Joe McHugh announced that Junior Cycle exams in June for 60,000 students would be replaced with school-based tests in September.

It was planned at the time that the printed exam scripts would be distributed to all schools and form the basis for the tests.

However, these exams look set to be abandoned in favour of school-based assessments during May in most schools, according to well-placed sources.

There is a recognition that allowing schools to use printed Junior Cycle exam scripts for their tests would pose major problems in the absence of a centralised timetable.

Schools say students could easily share the scripts on social media unless exams are coordinated across all schools at the same time.

Instead, most schools are likely to set and conduct their own assessments - such as written tests or project work - which will be marked by students’ teachers.

Schools will still be free to use official assessments provided from the State Examinations Commission or the National Council for Curriculum and Assessment if they so wish, according to sources.

Department officials are due to meet with education stakeholders on Wednesday to finalise plans. An official announcement is likely to follow this week.

The expected shift in policy follows concerns that delaying Junior Cycle exams would lead to unnecessary anxiety among students over the summer months and logistical problems for schools in autumn.

Despite the cancellation of Junior Cycle exams in June , sources say the majority of exam scripts are most likely printed already.

Over recent years, this process has occurred during the spring, with the largest subjects - such as English, maths and Irish  - printed first and the smallest subjects printed towards May.

Hundreds of drafters, setters and translators are involved in setting the written exam papers.

As was flagged by Mr McHugh in his initial plan for Junior Cycle exams in September, school-based assessments in May will not be State-certified or marked by the State Examinations Commission.

Instead, these tests or assessment components will be graded by students’ teachers and feed into a school-issued Junior Cycle Profile of Achievement (JCPA), which is given to all students.

This JCPA captures student achievements using a number of assessment elements undertaken over the three years of the junior cycle.

Instead of traditional grades, students are recorded as having either “achieved” or “not achieved” an area of learning.

Confusion over the future of the Junior Cycle exams was first sparked by a secondary school in Co Galway – Coláiste Bhaile Chláir – which announced last week that it would set its own j tests for students in May instead of waiting for exams in September.

It was followed by Presentation Secondary School in Kilkenny, which also announced on Wednesday that it was going ahead with its own exams for its junior cycle students.

Both said they were taking the move to avoid students being placed under “extreme pressure” over the summer.

This prompted an appeal by Mr McHugh for schools to hold off making decisions on Junior Cycle assessments until discussions took place with representatives of students, parents and schools.