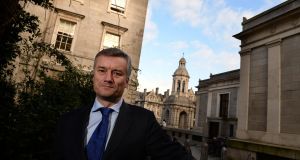 Dr Patrick Prendergast: TCD’s membership of the league will have a positive impact on students. Photograph: Dara Mac Dónaill

Trinity College Dublin has become the first Irish university to join a leading network of European research-intensive colleges which includes Oxford and Cambridge.

The development is a timely boost for the higher education sector at a time of growing anxiety over the standing of Ireland’s top universities, which have been sliding down international rankings.

Trinity’s membership of the League of European Research Universities was announced on Friday afternoon to a gathering which included Minister for Education Richard Bruton at Trinity.

The league is regarded by EU bodies as a major player in formulating policy and has a significant impact on lucrative research funding programmes.

This is the first increase in members to the league in 10 years. In order to be accepted by the league, Trinity underwent an evaluation of measures such as its research volume, impact and funding, size and disciplinary breadth.

He said the university’s membership would strengthen the league’s position in advocating the interests of research-intensive universities in Europe.

Mr Bruton said the development was not just a major achievement for the university, but also for Ireland.

“As the Irish proverb goes ‘ní neart go cur le chéile’ – there is strength in unity. And certainly by joining this network of high calibre universities, Trinity College Dublin’s voice will be heard and have real impact on EU policy for research and innovation,” he said.

“This is good news for Irish education and for future jobs creation.”

Concern over the standing of Ireland’s top universities mounted earlier this year when no Irish college made the prestigious top-200 list compiled by Times Higher Education.

Trinity College Dublin, which ranked 160th last year, was omitted at short notice due to an error which saw it tumble down the rankings.

The rankings organisation is due to issue a revised list soon which is likely to give Trinity a new position.

With the addition of Trinity College Dublin and the University of Copenhagen on Friday, there are now a total of 23 universities in the League of European Research Universities.