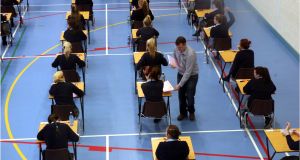 Latest figures also show the depth of the social divide in Dublin, with pupils in schools in the most affluent areas up to five times more likely to go to third-level than those in the poorest areas. Photograph: Dara Mac Donaill

Private schools dominate the top places in new league tables based on the proportion of students who progress to higher education.

Fee-paying schools account for 10 of the top 20 schools sending the most students to college, according to The Irish Times annual Feeder Schools supplement.

Latest figures also show the depth of the social divide in Dublin, with pupils in schools in the most affluent areas up to five times more likely to go to third-level than those in the poorest areas.

When broken down by postal district in the capital, numbers going to college were highest in Dublin 4, 6 and 6W. Average higher education participation rates across schools in these areas were between 90 and 100 per cent.

By contrast, progression rates were lowest in Dublin 8, 11 and 24. Average higher education participation rates were between 39 and 50 per cent.

These latest numbers are likely to place a fresh focus on policies aimed at narrowing the class divide at third level.

Despite the introduction of “free fees” 20 years ago and a range of access programmes, the gap has only slightly narrowed during this time.

Overall, Holy Child School, Killiney, Co Dublin, tops the league table for the proportion of students who went to third-level this year.

When broken down by the most-improved progression rates over the past five years, Gael Choláiste Chill Dara in Naas, Co Kildare, tops the table.

While the Department of Education has banned the publication of league tables based on its own data, feeder school lists are based chiefly on information provided by individual higher education institutions.

Writing in today’s Irish Times, Minister for Education Richard Bruton states that while league tables will generate public interest, “no one can imagine that they will tell the full story about a school”.

“If you define success around just one dimension, such as exams, then schools could be seen to improve by turning away the children with greater needs, for example,” he writes.

“[This] would be entirely in conflict with what we want to achieve for our education system, including breaking down barriers of disadvantage, responding to special education needs and developing alternate pathways into education.”

Prof Simon Burgess of Bristol University maintains that parents should have a right to this information.

“Schools are given a lot of public money and custody of our children. The way in which they develop the skills of our children is extremely important and they should be accountable.

“Of course, it is not the only factor that matters; parents care deeply about other factors, but are entitled to this information so they can get a rounded picture.”