While 40% improved on their calculated grades, most scored the same or worse 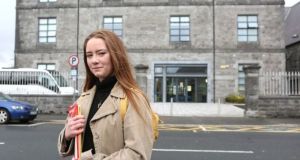 Kate Ryan was one of 2,000 candidates who who received their Leaving Cert results on Tuesday after sitting postponed exams late last year. Photograph: Joe O’Shaughnessy

Leaving Cert results day is normally a time of heady expectation punctuated by whoops of delight and high-fiving in school corridors.

Kate Ryan was at home alone as she hovered over the blue button on her computer screen containing her Leaving Cert exam results.

The 19-year-old narrowly missed out on her dream course of medicine in NUI Galway last year based on the calculated grades she received.

“I scanned the results online to see if I’d done any better than the calculated grades I received last year. . . but, no. I’d scored the same. It was all a bit unceremonious in the end.”

She wasn’t alone. A total of 2,000 students received their Leaving Cert results on Tuesday for postponed exams they sat in November and December.

Of those who had received calculated grades last year, about 60 per cent got the same result or worse, while 40 per cent improved their grades.

Most students – like Kate – targeted just a handful of exams in the hope of securing a higher-preference CAO course.

“It was difficult. The exams weren’t like a normal Leaving Cert. There was no tuition for six months beforehand. Students were studying on their own, with no real build-up,” she says.

Still, Kate hopes she can secure a place in medicine by re-applying to the CAO this year and resitting the Hpat, an admissions test used for selecting students into medicine.

Amy Walsh (18) , on the other hand, was on a high after receiving her Leaving Cert results. The Dubliner narrowly missed out on studying business at DCU and was convinced she could do better in the written exams,

She sat four subjects and received higher grades in two subjects: Irish and geography. “I’m delighted. I’d felt I could have done better in those exams and I did,” she says.

With an additional 22 CAO points, she hopes to be able to take up her chosen course next year.

It wasn’t just the class of 2020 who received their results on Tuesday.

Síle Mhic Réamoinn (60), a mother of five from Co Wexford, decided to take on the challenge of the higher Irish paper.

She grew up in the UK where she had no access to Irish tuition.

After moving to Ireland at the age of 18, she became interested in the language and began to pick up words through her children’s homework.

“My youngest daughter became a gaeilgeoir . . . She passed away and this was a way of honouring her,” she says.

The exam – all six hours of it – was physically draining.

“It nearly killed me. I was sure I’d made a hames of it,” she says.

While she found out she scored a H2, she was delighted.

“Thrilled. Absolutely thrilled. I’m still on a high,” she says.

She paid tribute to Conradh na Gaeilge for their support and John Gavin, a teacher who runs Leavingcertirish. com.

“I’ve so much respect for students. The pressure they are under is huge. I hope that whatever results students got today, that they can say they did it. They can move on to the next stage and be proud of what they’ve done. Life rolls on.”