This house believes debating societies are here to stay

They are where witty, argumentative, confident students go to earn their stripes, and a top goal each year is to make it through the rounds of the prestigious Irish Times Debate competition, now in its 55th year 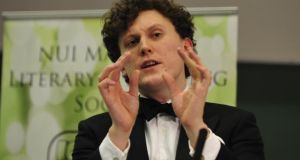 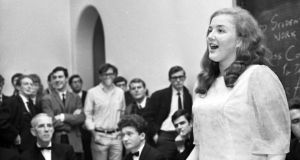 Marian Finucane in 1968 at the semi-final of the Irish Times Debate. Photograph: Tommy Collins

Back before TV sets were in every household and before every occasion was marked with a group selfie, third-level students turned out in their hundreds, and sometimes thousands, to watch student debates.

In the days before the move to Belfield, UCD’s lecture theatres on Earlsfort Terrace were packed to the rafters at weekends, as people watched future barristers, Supreme Court judges and leaders of the country battle it out with words and wit.

“It was great entertainment,” says Prof David McConnnell, former professor of genetics at Trinity College, who in his time debated against former president Mary Robinson and President Michael D Higgins.

“The L&H [Literary and Historical Society in UCD] in the 1960s was for the most part a bit of a bear pit, and speakers were at the mercy of the raucous, witty audience, where politeness meant nothing at all. The Hist [Trinity] by comparison held its debates on a Wednesday and was a very sober place. It ran to a set of laws which were rigorously applied. It was much more like a parliament, with the rules modelled on the parliamentary rules of debate.”

Today, Irish third-level colleges continue to debate issues of the day, often long before they make it into mainstream media. And while the turnout at in-house debates no longer violates any sort of fire regulations, many, such as the Hist at Trinity College, continue to pull in huge membership.

“We were on 3,000 members a couple of years ago and we dropped [in membership] last year, but we are starting to build up again,” says Julia McCarthy, auditor of the Hist. “We do a four-year membership, so our total is close to 10,000 now, but our active members are less. On a Wednesday we’d have 50-100 for an average debate. For big ones we’d have up to 200 people.”

Other debating colleges, such as UCC’s Philosophical Society, have struggled in recent years with membership, in part because there are more societies on campus. “We are a lot smaller than five or 10 years ago. In the past 10 years there’s been a big expansion of societies for people and there’s absolutely every kind now. Our memberships stands at 650, but they’re not all competitive debaters. Normally we’d get 30 people each year who are really into it, but it could be up to 100,” says auditor Clodagh Feehely.

The rise of Stem

Historically, law and arts students were most engaged with debating. In recent years there has been a rise in commerce, science, medical and maths students, and societies debate on business, tax and Stem topics. By and large however, debating remains of greatest interest to law students.

For a long time debating was also largely the preserve of men. The tide has turned, with more women members and auditors at the helm. Even so, enticing more women is a priority for debating societies. Last year, Trinity held a very successful women-only debating competition, and this year UCC has a mixed doubles debating tournament for Irish and UK colleges.

Workshops have also been organised for judges. “I haven’t personally experienced it, but it did come up in [national] circles sometimes that judges can have a bias towards male debaters,” says Feehely. “In the past women have had the critique ‘Oh you’re being hysterical’ or ‘you’re speaking very high’. Definitely, the community as a whole has worked really hard to sort that out. In workshops we’re teaching judges to look at the arguments, not how they are delivered, but what people are saying.”

The reasons people are drawn to debating are mixed. Some love to have a platform for their opinion, others want to get over a fear of public speaking and others were into debating at school and just never left.

For those involved, the benefits include increased confidence, the ability to construct and present an argument clearly and to consider a viewpoint from every angle, particularly when you have to debate something that is against your personal opinion.

It may not play the same role on campus as in the mid- to late-20th century, but the Irish debating scene is still strong and vibrant, and the standard is regarded as among the best in the world.

There’s a huge sense of community among Irish debaters. Societies meet regularly at domestic competitions and international championships. Social-media groups exchange ideas for motions and good wishes for those about to compete.

It’s a world where foundations of lifelong friendships are laid. This happens nowhere more than at The Irish Times debating competition, now in its 55th year. This year’s competition, in association with the 1916-2016 Centenary Commemorations, launches in the GPO on October 7th.

The competition is one of the most prestigious. About 150 teams from around Ireland participate each year. All of the major colleges, including Queen’s, NUI Galway, DCU and Maynooth University take part, while others, such as UCD, put forward teams from a number of societies, including their Med Soc, Law Soc, and the L&H.

The Solicitors’ Apprentices Debating Society of Ireland and the Royal College of Surgeons in Ireland also take part, and the Irish Army debating team has been making an impact on the competition.

It’s regarded as much for what past winners – including comedian Dara O’Briain, Justice of the Supreme Court Adrian Hardiman and broadcaster Marian Finucane – have gone on to achieve as it is for its prize: a three-week trip to the US.

“You’d enter several debating competitions, but it is always the biggest and the best,” says Frank Kennedy, a barrister and Dublin city councillor, who won the competition in 2005. “It had the most participants and was the only one that really rewarded oratory. The other competitions tended to focus on debates in small rooms on very forensic technical points, whereas The Irish Times final and semis are in big auditoriums, with big crowds, and to win you generally have to give a big speech.”

Unlike in other debating competitions, participants get at least a week’s notice on their position on the motion, so preparation is substantial. “Practice makes perfect, and the more you debate in college the better you get at it, but there are people who are just naturally very good speakers,” says this year’s convenor and 2011 winner, Áine Hartigan. “You have to put in the hard yards and do the research once you have the motion, then, in the debate, able to hold the attention of the crowd and able to persuade people: that’s the real skill.”

The three-week college speaking tour in the US is the biggest prize in Irish debating. “It’s probably one of the big selling points of the competition and separates it from the others. The prize is great and really shows how important the competition is when you win it,” says 2014 winner Dearbhla O’Gorman, now a trainee solicitor at Arthur Cox.

“With The Irish Times competition you do come back year after year, maybe to judge a round or just watch the final. You meet all your friends and the people who have taken part down through the years. It’s a lovely community to be involved in.”